As usual, I'm late with this recap.  I was performing at ALA in Chicago over the weekend (that's a conference hosted by the American Library Association and it RULZ) then had a gig Monday night, blah blah blah.  So my recap is late once again.  Someday I'll get it together, I promise, sweet pussycat.

What went down in episode 6 of The Bachelorette?  The standard fare that we have come to expect from this crew: Michael getting wicked lawyery, James (The Don) expelling water from his body in the form of a whole lotta tears and sweat, and Juan Pablo reminding us why the hell he's here (because he's a professional soccer player).

The crew headed to Barcelona, Spain (and based on Drew's pronunciation of whatever Spanish word means "small, street band," you KNOW that he's one of those jags who pronounces it "BarTHHHHElona."  What do I say to that? BARFelona--heeeyo! I'm the worst!).  Chris Harrison informs them of the week's activities: two 1:1 dates and a group date with roses up for grabs on all date and NO COCKTAIL PARTY (that's like WASP hell!), so there's no time for 11th hour pleas to Desiree.

The first 1:1 date goes to Mr. Clean Cut himself, Drew.  As soon as Des and Drew meet up on the street, he goes in for a real kiss which was very Will Hunting of him (remember that scene in the diner when Skylar talks about a goodnight kiss and Will talks about a goodnight lay and then they kiss? Ahh Boston... where the greatest dudes are bred).  They explore, eat tapas, drink from a filthy spigot and Drew explains that his father is a recovering alcoholic who has cancer (but nobody knows about the cancer).  Spoiler alert, Drew: eeeeerybody's going to know about the cancer now.  Hope Pops is chill with it!

That night they stumble upon a trio of musicians playing in an alley and they both "dance" which is horrible to watch.  Wow, Desiree is awkward when attempting to move her upper body and lower body in the ritual that humans call "dancing."  They pass through a tiny, unmarked door and into a gorgeous courtyard where they are supposed to have dinner, but--aww snap--Drew has other plans!  Clean cut Drew takes Desiree by the hands and WHISKS her away (dude whisks HARD), back into that same alley, for a HARD CORE MAKE OUT beneath bright lights & in front of 3 videocameras.  It all looked very dramatic and completely moronic.  But perhaps all public make-outs do?  I have no idea cause I'm usually on the inside of those hard core make-outs (Heeeeeyo! UP TOP! But seriously I made out with this dude at a bar in February and I can only imagine how weird we must have looked. Me, this perfectly coiffed knock out vision of perfection making out with a bearded mountain man in a hunting shirt. For reals!).

Post-hard make out, Drew tells Desiree about what he overheard in the van last week: Mikey (rest in peace sweet Chicagoland beefcake) and James (The Don) talking about what life would be like for them back in Chicago, post-Bachelorette.  Drew & Kasey heard the guys talk about their ambitions of being the next Bachelor or at least trading on this newfound fame to score some ladies/free bottle service.  Class acts, those two! (But you know that if Mikey ever asked me out, I'd definitely say yes, even though he's probably a sleaze.  Ahh the power of roid rage-style arms & tribal tattoos!  I'm helpless against it!)  Drew scores a rose in the alley (good thing Des always keeps those on her person, huh?)

The next day is the group date and the crew is Brooks (still effeminate), Chris (pasty but growing tanner/cooler), Kasey (#StillSux), Michael (Chunky Swayze if Dalton had gone to law school instead of NYU for Philosophy--oh don't you doubt I know my Roadhouse references for a MINUTE, reader!), James (The Don and the resident  house pariah), and Juan Pablo (remember him?).  Desiree is in Sporty Spice mode (Poor Man's Katie Holmes/Sporty Spice--how many pop culture references can I make at once!? TWO?) and meets the boys at a soccer stadium where they will be doing drills and playing.  Michael rocks a sweatband because that's his favorite activity in the world (other than screaming, "I OBJECT!" every chance he gets) and Juan Pablo says he feels like he's home.  After some drills, Desiree disappears then walks back out with her team, which is comprised of WOMEN!  The guys respond in such a way that I assume they're unaware that women are allowed to PLAY soccer, much less that they have their own league.  The 6 dudes will be playing against Des and her team of 5 professional soccer players, yet Brooks still says, "if we don't beat them, we'll be embarrassed forever."  Ummm guys, you know that these 5 ladies are PROFESSIONALS at this, yes?  Why would you be embarrassed when your team of 1 professional and 5 amateurs loses to a team that is 5 professionals and 1 amateur.  Oh wait, because they're WOMEN!? Oh wow--you guys really come off like total pussies, but apparently you're sexist pussies, which is the worst kind of pussy.  But I digress.  Desiree and her team friggin' slaughter the guys 10-2 and all is right in the world.

At the afterparty, Desiree recites an original poem for Chris (barf) and marvels at his sports skills, saying, "I could give you any activity and you could do it so good."  Too bad you can't use grammar so good, Des.  Meanwhile, Kasey and Michael are talking about the #JamesSituation and decide to confront James about what he said in the van.  Chris just happens to be sitting there (hold onto that nugget for later).  Kasey and Michael confront James and he gets mad REAL QUICK (not the sign of a person who feels especially innocent, huh?) and lights into the dudes.  He finishes off his monologue with a classic, Half Baked style exit, pointing at Michael, then Chris, then Kasey and saying, "Yeah, fuck you Michael and fuck you and fuck you." 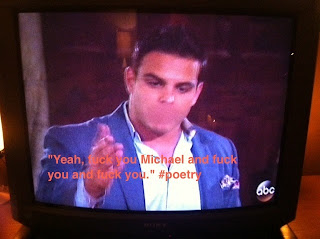 My favorite part about the whole display was that Chris said NOTHING to James and yet still got the 'ole "fuck you" to the face. There is nothing more hilarious to me than when people get caught in the verbal crossfire like that.

Kasey then tells Desiree about all of it and Desiree asks James to stick around after the guys leave for some 1:1 time. Before they all leave, Desiree says that she won't be giving out a rose tonight (which was probably pretty frustrating to Juan Pablo since I imagine he KILLED IT in the soccer match). 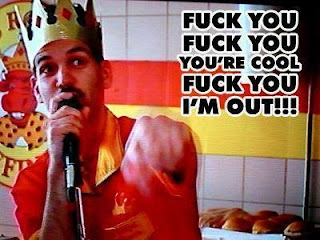 During their alone time, James is unrepentant yet weepy and insists that he was just making small talk with Mikey (so apparently he'll go along with anything you say to him in conversation?).  Desiree is tired and confused and sends him back to the hotel.

The next day is the Zak/Desiree 1:1 and I remain flabbergasted about the fact that he's still HERE.  Zak is an annoying tool with a crazy positive attitude who showed up shirtless and covered in bronzer on night 1!  And yet he's still here!? Huh? (I know that in Sean's season the girl who showed up shitfaced & in a wedding dress made it to the final 2, but I still can't believe Zak is here!)

Since Barcelona has so much art, their date consists of going to a windowless studio to sketch (way to make use of the city, producers!) a few models and each other.  A nude model shows up (OF COURSE HE DOES) and assumes a pose that can only be described as "Taint Shame."  I would post a photo here but I'm afraid I'll end up on a watch list.  It was pretty sketchy (HEYO!) and of course Zak used that opportunity to strip down to his tightey whiteys and pose (come on Zak, did Marky Mark teach you NOTHING in the early 90s?).  That night they dress up for dinner in an underground vault where they drink, explore, and make out in a low-ceilinged hallway that made me feel claustrophobic just looking at it (plus, the dude on the other end of that tongue is Zak, so it's even worse).

Back at the hotel, confrontations are going down left and right.  James insists that he's just being realistic about life after Bach (IS there life after Bach?  Do you believe in life after love? Wasn't that Cher song DOPE? Do you enjoy questions?) and Brooks makes the valid point that when you're dating a girl, you rarely talk about how excited you are for the other girls you'll date after this one (truth).  Michael calls James toxic, evil, and sinister and Drew calls him a "piece of shit." I love it when dudes talk smack!

James and Desiree have a sweaty 1:1 and she's still torn about who to trust, but soon it's rose ceremony time and she has made her decision.

Drew and Zak already have roses, os they're all safe.  Chris Harrison informs us that THREE dudes will be getting the Heisman tonight (that feels like a LOT) and 3 will be getting roses.  Who scores a rose?

Chris (writing poetry pays off only on The Bachelorette, not as an actual career path)
Brooks (he made a good point about James' shitty behavior, so I'll give him a pass this week)
Michael (Chunky Swayze's passion for law is somehow appealing to Des!)

So who's hopping on the S.S. Get the F--k Outta Town to a dingy named "CYA Later!" then to the AirTran shuttle to Losertown, population 3?  Juan Pablo, Kasey, and James.  What do we think of that?

Juan Pablo: there was very little communication between Des & JP, it seemed. He was hot, though.
Kasey: he was annoying and non-hot from the very start. I'm stunned he made it this far (too harsh?)
James: his thick neck & broad shoulders were hot, but the fact that he was SO "eyes on the prize" and the prize wasn't Desiree was problematic.  I'm sure Mikey's waiting for you at Le Passage, buddy.

Where are Desiree and her 5 suitors headed now?  To an island off Portugal where tears are going to flow like we're in a waterproof mascara testing laboratory!  See you Monday!