As a (less than) proud member of Bachelor Nation (#TheWorst), I tuned in to see if the "Tell All" episode was like every "Tell All" episode before it and yes, it was, in that every guy was tan, trim, and well-coiffed; there were some not-so-familiar faces (even Chunky Swayze zinged Jonathan for being one of those forgettable losers); and some smug mugs that we'd rather forget (sociopath father Ben, to be specific).

But the REAL winner in last night's episode?  The overly expressive audience.  Those ladies were working HARD for their $100 extra stipend and flexing those facial muscles with wild abandon.  They captured every expression: disappointment (at James' "explanation" of why he's not ashamed to be a fame whore), shock (at Ben's insistence that he was "sooo judged!"), and elated (at every G-D word out of Juan Pablo's mouth).  Check out this lady below, she is noooot believing a word she is hearing!! 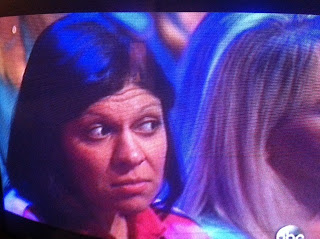 And look at these gals below: the one on the left is about to sneeze (an allergic reaction to how much Zak W. suuuucks and is a corny assed cheesedick) and the one on the right is a spooky psychopath who knows that Ben's baby mama bumped into Dan (I know, who the EFF is THAT guy? Oh, the one who looks like a Ken doll with dark hair and works in beverage distribution? WHATEVZZZZ!!) in Vegas and spilled mad beans about the fact that Ben had a friggity whack girlfriend when he got the baby mama pregnant! Snaaaaaap! 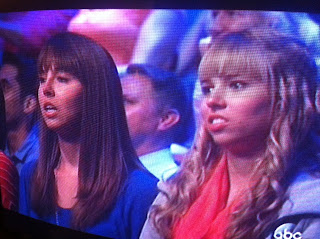 But seriously, folks (OMG don't you hate it when old timey standups use that as a transitional phrase? I DO!), there was some drama last night and, as usual, Chris Harrison had some fantastic punchlines.

At the start of the episode, Desiree and Chris crashed some Bachelor viewing parties and we learned an important lesson: that EVERYONE in America watches The Bachelorette while drinking wine out of extra large goblets that look like props from Cougartown (SUCH an underrated show!).  For their NYC-based party crashing they were joined by Bach alums Ashley and JP, Jason and Molly (and their baby), and Trista.  What a community that Bachelor franchise is!  It's like the least exclusive Country Club in America.  Desiree says that she loves seeing that all of these people are watching the show and "rooting for her."  Oh gurl, we're not rooting for you so much as laughing at the idiotic dudes.

Then Desiree sits down for some girl talk (and period-synching) with her BFFs Ashley, Ali, and Emily.  Because being on The Bach is like joining Scientology: YOU MAY ONLY BE FRIENDS WITH FELLOW BELIEVERS!!  Ali's hair looks grey (get some warmer tones in your weave, gurl), Emily's hair is sweet perfection (of course), and Ashley barely says a word (and has brown hair, poor thing).

Finally, it's time to trot out the rejects and hope that America remembers them/gives a rat's ass.  Who's in the studio?

Robert (spin sign inventor/tool), Dan (dark haired Ken doll who apparently roams around Vegas talking to the exes of other Bach rejects), Nick (has a mole and that's all she wrote), Brad (had a kid and a restraining order taken out on him BUT JUST GIVE HIM A CHANCE!), Jonathan (lawyer who was super drunk and creepy on that first night), Bryden (Iraq War vet who doesn't look as hot as he seemed before), Brandon (guy who was really intense and had major family problems--but his hair is longer now!), Will (Chicago banker who should link up with Mikey and James for some Bach Chicagoland domination), Zack K. (Chuck Taylors), James (The Don), Ben (a father and a Christian who never called his son during the show and didn't attend church on Easter--I've been listening to too much Chunky Swayze and it's turning me all LAWYERY!), Mikey T. (who looks HOT and is wearing NO SOCKS!), Juan Pablo (who has a cheering section in the audience), Kasey (#OMGIhateyou), Michael G. (Chunky Swayze who seems to have grown bushier eyebrows while recovering from his broken heart), and Zak W. (whose entire existence feels like a joke).

Everyone in the studio watches a montage of clips that summarize the season: James saying "F you" to a line-up of guys ("spraying the room" as Chris Harrison put it), Ben being creepy and lying to every guy while wearing a ridiculous tank top, Zak being overly bronzed and shirtless, general smack-talk.  There is nothing more enjoyable than witnessing a guy call another guy a "piece of shit" in a montage that they are both watching while seated right near each other.  It's truly delightful.

Bryan (the guy who isn't even very hot and had a girlfriend while he was on the show) opted not to attend the taping, so the guys run roughshod over him and Chris Harrison encourages it.  Awesome.

Ben is the first guy to get in the hot seat and Chris says that things started off so well (when he first emerged from the limo with his sweet son), but then "after night 1, everything went downhill."  I love that Chris said, in so many words, that the minute Ben opened his mouth, he was doomed.  TRUTH!  Ben says that it was really hard for him to watch his "girlfriend" date other men (umm... that's a shared experience by everyone in the house, moron--you're NOT special) and that he feels judged.  Maybe because you judged ALL of the other guys as unworthy of your friendship or respect on day 1, Ben.  Ben bangs the drum of being a good father and Zak shuts him up by saying that Ben NEVER mentioned his son, while Juan Pablo mentioned his daughter all the time.  SHUT IT, Dixieland American Psycho!

Up next, James (The Don) attempts to convince Bachelor Nation (I'm trapped within its grasp!) that he really cared about Desiree, despite the fact that I bet if you asked him for his favorite thing about her, he's say, "ummmm... brown hair?"  Chris grills him about the alleged "If I make it to the top 4, I could be the next Bachelor" comment and he seems to blame Mikey for it (is there trouble within their sockless crew?).  Mikey chimes in and explains that they weren't plotting anything--they simply felt that Desiree liked other types of guys better (seems to be true) and they were accepting that perhaps she didn't like them, and what would come next.  Mikey explains himself well and James continues to look like a scheming a-hole.  This was when we saw some SHOCKED faces from the crowd.  (Ladies in the audience: you're SHOCKED that two jacked, conventionally handsome guys are insufferable jerks? Have you ever been to a bar on a Saturday night?)

Then Juan Pablo gets in the hot seat where he charms the pants off of America (ferreal) with his friendly demeanor, confidence, and good looks.  Do I smell an international soccer star Bachelor up next?

Then, it's the moment that none of us have been waiting for: Zak W's time in the hot seat.  He looks exhausted and like he has been clocking extra hours at the spray tan salon.  But I'll admit, he makes some very relatable, heart-wrenching comments about being single when most of your peer group is not.  Come on Zak--don't make me feel bad about mercilessly mocking you for all these weeks!  It's what I DO!

Finally, Desiree comes out in a cute, gold dress and faces her reject harem.  Chris Harrison asks her if she had any "nerves" and she says no, she had anxiety about this event. GURL. Those are the same thing. You are an idiot, but that dress DOES look great on you.  Chris makes a comment about "bad boys" to which Des replies, "whatcha gonna do?" and Chris gives her NOTHING because he's NOT a fan of Inner Circle (yes, that's the name of the wordsmith's who crafted those genius lyrics) or outdated jokes.  A flood of apologies commence: Jonathan apologizes for being a creep on the first night; Chunky Swayze admits that he played the lawyer card too intensely.  Desiree says that James manipulated her and James make a comment that effectively breaks the first rule of Reality TV Club: don't talk about reality TV club!  Juan Pablo asks her why he never got a 1:1 date and then winks at her (#swoon #NoSnark #ICanBeGenuineOccasionally).  And what episode would be complete without Zak making an ass of himself?  He says, "I think I have something to say..." then pulls out his guitar and plays a song he wrote. Oh Zak, you were the guy who knew Dave Matthews Band songs on the guitar in college, weren't you?  The guy who was like, "ladies LOVE it when I sing to them" while everyone was actually mocking you privately.  Have your swan song and get back to the oil fields, buddy.

And before we knew it (120 long minutes later), the episode was over with Chris Harrison's promise that next week will be the MOST emotionally intense Bachelorette finale EVER!  I can't decide if the producers are messing with us (and making it seem like something goes VERY wrong at the end) or if it's just tricky editing and things will play out in a pretty standard way (with Des rejecting the first guy to arrive at the proposal site then, choosing the most boring guy--likely Brooks--and breaking up with him within months, then entering into a life of D list "celebrity" status).  We'll find out soon!

Posted by Selena Coppock at 9:26 AM