I have been a real jerk lately, I know.  I had a string of a whole lotta shows then I went upstate on vacation and somehow my beloved Bach recaps got lost in the fray.  I'm sorry, sweet pussycats.  (But in lighter news, my vacation was DOPE and I drank dollar beers in a VFW hall where the only rules are: yes, you can smoke indoors, but no, you cannot drop the F bomb. Cool by me!)  It's especially bad timing right now, when we're in the home stretch!  But I'm finally all caught up and ready to talk smack and make metaphors-a-plenty.

First off, Chunky Swayze had a tearful goodbye in the close of the episode before last.  I was sad to see him go, but he and Des never seemed to have a romantic connection, ya know?  And when your first 1:1 date is in the final 5, you just haven't laid enough groundwork for this TV relationship to thrive.  (My vast knowledge of Bach timing and development is both inspiring and pathetic.)

So on Monday's episode, we were down to 4 suitors remaining: Zak (SWEET LORD, WHEN WILL THIS ELABORATE JOKE END?), Drew (they grow 'em real clean cut and earnest in Scottsdale), Chris (he writes lame poetry but he used to play pro ball, so his coolness factor is back to 0), and Brooks (who needs to speak like a grown adult).  Desiree is ready to criss-cross the country like a 90s child rap group wearing jeans backwards cause it's "HOMETOWNS."  Does anyone else find it gross that "Hometowns" has entered the popular vernacular and it always means Bachelor franchise-related hometown visits? I love to hate this show, but nonetheless: barf.

Desiree's first trip is to Dallas, TX where Zak, his abs, and his family's shaved iced business is located (you can't make this stuff up).  Zak says, "if people think I'm crazy--wait 'till they see my crazy family" and his family (aka Zak Attack) does not disappoint.  Before family time, Des and Zak meet up in a local gazebo (what would Bach DO without small town gazebos?), hop in the 'ole family shaved ice truck, and work a quick shift at a park.  Sweet date!  Chipping ice and handing it to screaming children while you (probably) don't even make minimum wage!  I keep getting taken on these dates that just involve free dinner, free drinks, and street-side kisses, but I just wish someone would dress up in a penguin suit and cart me around in a shaved ice truck!  Finally, Des and Zak head over to Zak's parents' McMansion (what would Bach DO without McMansions?) where they sit down for lunch with Zak's parents, sister Carly (nice hair, gurl!), and brother Denton.  After dinner, the family serenades Desiree with a song that Zak wrote (HOLY DUMB CHILLS!) with the lyrics, "Desiree, we can see your place in our family."  As if that isn't bad enough, Zak then takes Des into the backyard where he gives her a promise ring and drops the L bomb. Lawdy lawdy it was intense.  I'd like to share a saying (that I just thought of) with Zak: Sometimes when you pull out all the stops, you just get STOPPED.  (YOU'RE WELCOME, readers! Feel free to use that, but please mail me a dime every time you do.)

Next stop on this hometown visit thrill ride: Scottsdale, AZ to meet Drew's family.  Drew is looking hot and he meets Desiree, then they drive to his mentally handicapped sister's residence to pick her up for the visit. I may have a heart made of stone and a sharp tongue, but watching Drew talk about and interact with his sister Melissa had me in tears.  Later, Melissa's father referred to her as an angel and I was WEEPING (and it wasn't because of the white wine I was drinking and PMS I was experiencing--and am still experiencing, UNIVERSE!).  Melissa swatted at Desiree's hair, which cracked me up ("she likes hair" -Drew) then the trio drove to Drew's mother's house to meet up with Drew's dad Mal, mom Linda, stepfather, sister, her husband, and brother Mal (that family sure loves the name Mal, huh? Did they invent Malware? That joke's for you, NERDS!).  Drew's mother's house was decorated in a style that you might call "Dream Catcher Overload" but she seems lovely.  Both of Drew's parents love Desiree and think she's very down-to-earth and real (which she truly seems) and Drew tells them that he wants to marry her.  That night after dinner, Des and Drew make-out in the driveway (sweet, suburban times) and he tells her that he loves her three times.  A hattrick of unrequited admissions of love!

But the High Hopes Express has gotta chug along and the next stop is McMinnville, Oregon where Chris grew up and still gets his snots pulled out by his father.  But before Chris's father can give his son a "nose adjustment" (looks more like pulling snot like you do on a baby, but you can call it whatever you like) and adjust Desiree's back, there's softball to be played and softball-themed puns to be made!  Desiree and Chris suit up in baseball shirts, hats, and eye black (which was REALLY important cause the day was grey and overcast) then bat at a ball while repeatedly saying things like, "you're a catch!" and "Chris is stealing my heart." I couldn't keep up with all of them over the sound/movement of dousing my own eyeballs with Sriracha, but you get the gist.  Chris's mother rocks a pretty bold, stacked bob and spills the beans that Chris was hoping Desiree would be the bachelorette.  As I told my pal Emily when she shared a little too much information with a certain tattooed, HOT bartender who I went out with a few times, "Don't be spilling my BEANS, yo!"  Desiree continues her tour of driveway make-outs and after they kiss, Chris says that nobody could be more connected than they are.  Oh Chris, you are a video editor's dream with that comment because who's up next...

BROOKS!  The Salt Lake City, UT native (read: Mormon) who Desiree straight-up says she LOVES.  Yowza!  Are the editors making it seem like Brooks is a shoe-in just to throw us off the trail that probably leads to Chris or Drew?  It seems a little early for Desiree to be that candid, but who knows in this topsy-turvy Bach world.  Desiree and Brooks meet up in a park (and it's like, "thanks a ton for preserving these public green spaces, Frederick Law Olmsted," right?) where Des shares a tally of her favorite Brooks dates and memories.  Brooks is undoubtedly he most hesitant of all the guys and I fear that emotionally unavailability is what's pulling in Desiree (take it from a girl who LOVES emotionally unavailable dudes--they're the tops!  Unless you want to feel like a human who deserves to have feelings!).  Brooks's family is HUGE and wearing name tags.  At dinner, Brooks talks about Desiree as though she's not even in the room.  After dinner, Brooks's brothers (no relation to the preppy store--BOOMTOWN!) grill him with questions about Desiree, including "can she hang with you?" (yeah, I think she can whisper talk and be effeminate REAL well) and the bizarre, "if she was gone, would you want her back?"  Meanwhile, Brooks's mother talks to Desiree then reports back that it went just "OK" which felt odd.  I was having some flashbacks to Emily's season, when she ended up with Pompadour Prince/Robyn wannna-be, Jef.  I know that this big, happy family can seem SO enticing (especially when you come from a small family that is 1/4 psychopath brother--as Desiree's family is), but you KNOW that all that family closeness would feel suffocating eventually.  They kiss goodbye.

Then Desiree is back in LA and her tattooed brother Nate is coming for a visit.  Des says that she won't let Nate meet the guys just yet and in his typical mature, thoughtful, adult way, he says that he'd like to "get in their heads."  That evening, the 4 guys arrive for the rose ceremony and ratty Nate watches them from behind a pillar, looking more like a teenager stalking the lobby of his local hotel because he heard that his favorite band, Audioslave, was staying there.

Desiree sits down with Chris Harrison and says that she loves Brooks and is hoping for a proposal from him.  Yikes!  Again, I feel like the producers are manipulating us by pushing Brooks really hard but the winner will end up being Drew or Chris.  Time will tell.  In the meantime, we have a rooftop line-up to witness!

The four dudes are lined up, Desiree is in a cute, sparkly dress, and the tears are flowing before she has even had the chance to publicly ruin the life of a single guy!  What order did the roses come in?

BROOKS (either the producers are really pushing this storyline HARD or she genuinely, somehow likes this schmoe)
CHIS (she can look forward to a LIFETIME of snot removal at the hands of her father-in-law!)
and now it's between Drew and Zak... and if you think Zak is going to advance an INCH farther, I'd like for you to meet be behind the dumpster so that we can fistfight after school cause the rose goes to...
DREW!  (Hell yeah--he's hot, sweet, has a sick body, and Des can look forward to a lifetime of dream catchers on her walls!) 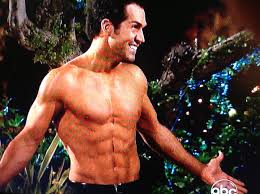 So finally, thank God, our long national nightmare of Zak as a viable Bachelorette contender is over.  Unlike all of America, Zak is shocked and upset.  Desiree cries and give Zak back his promise ring (which he later tosses out the window of the limousine cause it makes for good TV--I bet they had a PA there to catch it).  For how much I hated Zak all season, his final rejection limo ride gave me some sympathy for him.  He said that he had been in a slump and was sad to return to his life alone.  Aww buddy.  Lemme give ya two tips: (1) don't lead with your abs when it comes to courtship, and (2) never dress up in a penguin costume on a date.  Those two are on the house.  Good luck to ya, Zak.

Next week is the Men Tell All and I can't wait to get some updates on the rejects!  Are James and Mikey cashing in on their D list fame and slaying ladies together in Chicago?  Is Ben still a psychopath manipulator pretending to be a good, Christian man and father?  Is Bryden still using hair gel (I HOPE)?  Is Kasey still talking in hashtags and not getting women?  We'll find out on Monday!

Posted by Selena Coppock at 8:44 AM