Bachelorette Desiree: And Then There Were Three (Recap)

Last night, Chris Harrison FINALLY stopped his lying, boy-who-cried-wolf ways and we experienced something that was truly UNPRECEDENTED in Bachelorette/Bachelor franchise history.  What happened?  You'll soon find out, sweet pussycat.

The episode started off with Desiree at the bow of a boat sailing around Antigua with her voiceover blathering on about the fairy tale angle.  Yeah, that fairy tale where producers pull strings and force emotions and all of America watches and cringes--you know that 'ole story!  A classic just like Beauty & the Beast (or wait... is Desiree's fairy tale that one? Cause I gotta say Brooks is completely NON-hot).  Desiree super casually name-drops the exact name of the Antiguan resort, then walks to the dock where she appears to read a Bible.  We see a montage of Desiree's history with the three remaining suitors (because apparently ABC doesn't trust Americans to retain ANYTHING from the last 9 weeks of episodes).  The run-down is pretty much:

CHRIS: Des likes his nice body and poetry and says "I love his awkwardness."  Not the most "hot for you" thing to say about a potential mate.
DREW: His body is frigging INSANE.  Dude has a friggin' 10-12 pack and a face like an extra from "Happy Days" plus he's super sweet with his developmentally disabled sister. IT'S ALMOST TOO MUCH!
BROOKS: They don't grow 'em more witholding and seemingly disinterested than Brooks.  To add insult to injury (or whatever), dude speaks in a whisper.  Blech.

The first 1:1 date in Antigua is with Drew and he admits that he "didn't even know this place existed!" Oh, do they not cover Caribbean geography in your 1950s high school?  Just a whole lotta pep rallys and homecoming dances there, Drew?  Des & Drew (or as I call 'em: D&D--shitty dynamite) hop in an open top Jeep (and Des tells Drew that he has to drive because Desiree's lady brain would probably get them lots on the island, right?) and drive to a "festival" (which looked a lot like a bunch of paid extras, random crew members, and some local junk merchants) where they shop, awkwardly limbo, and enjoy steel drum music.  Then they head to a cliff where they eat pineapple and Drew says that the day Desiree met his family was the happiest day of his life (wowza--dude--THAT was the happiest day of your life?  Umm... have you never left your hometown with two middle fingers in the air while reciting the lyrics to Pearl Jam's "Leash"?  Just me? I guess that Drew and I have different definitions of happiness).

That night, their romantic, beachside dinner is rained out, but that doesn't stop them from a quick, rainy make out, just like that song from Billie Myers (1997, what what!) and while D and D play tonsil hockey (NO PADS OR HELMETS! HUH?), the producers scramble to set up a romantic Plan B setting.  Apparently,  to the set designers at Bach Headquarters "romance" means a whole lotta bright throw pillows and table runners.  Desiree and Drew chat by candle light and Drew says that he's ready to propose.  D&D both play their roles in the predictable tradition of the legendary FANTASY SUITE NOTE (ostensibly from Chris Harrison, which is pretty damn creepy) with the standard language "should you choose to forego your individual rooms blah blah blah fantasy suite."  Both act surprised and intrigued by this prospect (despite the fact that they could have recited that text without so much as opening the envelope) and retire to the bedroom, where Drew says, "all right guys, time to leave," and we're reminded that their make-out sessions are witnessed and taped by a crew of people.

Meanwhile, Brooks is whispering (the only way he knows how to talk--LEARN SOME ALEXANDER TECHNIQUE BEFOR YOU RUIN YOUR VOICE, KID!) about how he's not quite ready to tell Des that he loves her and he feels torn.  He flies to Boise, Idaho where his family owns yet ANOTHER McMansion, and talks to his mom and sister about his mixed feelings.  Brooks explains that he's uncomfortable with the idea of proposing to her and mom/sister push him to end things completely.  They both seem pleased that he's not going through with it.  So off he flies to Antigua to dump a girl on television (and you thought it was a schlep to travel to a local bar and dump your ex!). 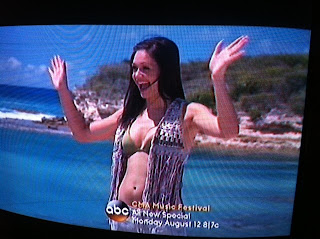 But first, Chris and Desiree have a 1:1 date and Des makes the greatest fashion faux pas of the season (and perhaps her life).  Words won't do this justice, so I captured the monstrosity on my phone for you, dear readers.

Now, to play devil's advocate for a moment (although I LOATHE people who play Devil's advocate generally.  They're just argumentative contrarians who want to prove you wrong), perhaps Des got a little overexcited about her tropical getaway and bought this fringed vest there on location.  I did that once in Vegas (because you can pack your skimpiest dresses for a trip to Vegas, but you get there and suddenly the dress that was sexy at home looks like a nun's habit under the bright lights of the Vegas strip) when I bought a SUPER SLINKY dress (by Vegas standards, which means it's little more than a bikini to be worn out at night) from bebe that I have worn a grand total of once (that time in Vegas).  So perhaps that's what Desiree went through with this vest.  Either way, it's hella busted.

Des and Chris have a fun date, despite her tragic vest.  They make out on the beach ("From Here to Eternity" style), swim, stand on some rocks, write their names in the sand, and Chris describes his love for Des using Savage Garden lyrics.  That night, they have a romantic dinner and talk about their future while some loud, high pitched shrieks happen in the background (local animals? kids on swings for hours? crying dogs?).  Des asks about where they'd live at the end of all this and Chris manages to sound flexible while essentially saying that in the future he'll be staying in Seattle, thank you very much.  Then the fantasy suite card appears with its standard text and Chris says that he'd love to watch the stars with Des (that aint the only thing you'll be watching HAAAAAAAY!), so they retire to said suite.  The suite is decorated with a lot of candles and familiar looking pillows (that are probably covered in Drew's DNA from the previous night).  Chris breaks out a fresh poem (OF COURSE) about how he's excited for forever with Des.  Soon they're back in their swimsuits, making out poolside while that damn squeaking noise drones on.  ROMANCE!

Finally, it's the day that WE know will be the day of reckoning, but Des does not.  Poor girl is just rocking some white jean shorts, a belly top, and a big grin.  Oh gurl, as my viewing pal Julia Johns (@juliaguli8) said "your belly AND your heart are about to be exposed."  Aww snap! Truth!  But before Brooks can crush Desiree's dreams, he's gotta get through a round of conversation with armchair therapist Chris Harrison.

Brooks and Chris sit down and Chris pulls out all the stops: are you SURE that you're not in love?  Do you think that some alone time in the fantasy suite would give you a chance to ask any outstanding questions you might have?  Have you ever been in love before?  Brooks answers the questions with his patented bizarre perspective and whisper talk.  He says that his head tells him that this is the end with Desiree, but his heart doesn't (huh?).  He says that knows how love feels and to him it feels like pain and vulnerability (huh?) and that's not how he feels with Des.  And he drops the line that everyone in the world is tired of: "I love her, but I'm not IN LOVE with her."  Oh shut up.  Did you hear that line in a romantic comedy and tuck it away for when you might need it?  Because it's moronic.

Finally, Desiree and Brooks meet up and girl is GLOWING.  Brooks is, understandably, freaking out and he immediately guides her to a bench at the end of a long dock (DON'T JUMP, DES! Brooks is a tool and not worth it.)  It's hard to watch her go from ELATED to see him, to confused about what is going on, to heartbroken.  If Desiree's psychotic, tatted-up brother were there, Brooks would have been beaten to a bloody pulp within moments. Brooks draws it out and talks in circles like the chickenshit pussface that he is.  Poor Des sits there and listens, like an inverse poor man's Katie Holmes (cause ya know how Katie pulled some NINJA moves to drop her alien  husband T. Cruise).  Finally, she curls up in a ball and starts crying HARD, asks him, "why now?" and then says, "I don't care that you just broke my heart--I love you." Oh girl.  Don't tell this guy ANYTHING good.  Just WALK AWAY.  They sit on the bench and marinate on things for FAR too long.  (If I were Des, I'd be like, "I wasted the cutest daytime outfit of the whole episode on THIS?  You can hardly even see my sick abs cause I'm curled up in this ball of heartbreak!")  Finally, they get up so that Brooks can go back to his freakishly large family in Utah.  They hug in the driveway and Brooks tries to console Desiree, but as I learned with my ex from 2008 (whose "career" is something I check on occasionally to make sure it's still there, stalled at the side of the road), HE can't help you get over HIM.  Walk away.  FINALLY Desiree does and Brooks does, too.  He has an emotional tantrum in the jungle and Des sits on the end of the dock and bawls.

AND THAT IS WHERE THEY LEFT US.  I gotta hand it to Chris Harrison: that shiz was UNPRECEDENTED!  Next week we have another great performance by Desiree's waterproof mascara and everyone's favorite unlicensed shrink, Chris Harrison.

Des, this one's for you: