Just read an interesting article on NYTimes.com. It's called Are You as Fertile As You Look?

Interesting piece about how in American culture, so many women work so hard to preserve their youth (looks-wise), but are forgetting that the biological clock keeps on ticking, even if you have great abs and full hair at 40.

Baby and fertility stuff is such a minefield and can make so many conversations unintentionally uncomfortable. I have friends who have dealt with infertility and difficulty on that front, and it's heartbreaking. You just want your loved ones to have whatever they want out of this life, and to not be grilled about it by strangers or clueless relatives.

I've found that most people simply assume that every young woman wants to get married and have babies. If your life plan differs from that two-step at all, brace yourself for dirty looks and comments like, "Who doesn't like BABIES?" (And assumptions that you must be a selfish and terrible person who pretends to be friendly, but actually burns onesies by moonlight.)

On stage, I sometimes joke that I've always never wanted children, but it's true. I've never imagined having kids. I've never had an impulse or instinct to be a caretaker to babies. I babysat a bit in high school and was a camp counselor one summer, but never really loved either job. Raising babies isn't everyone's cup of tea, and I wish that more people (usually strangers) would be a bit more mindful of that. Why is it that everyone can understand that, for example, some people like the music of Motley Crue, and others don't. Others HATE that music, in fact. Why not the same with kids?

I want what I want out of MY life and you want what you want out of YOUR life, and those things might be completely opposite, and that's OK. As my lovely co-worker Calvin says (in a hilarious voice, while he does the 'ole weave pat), "Do you."


Posted by Selena Coppock at 2:26 PM No comments:


Posted by Selena Coppock at 1:59 PM No comments: 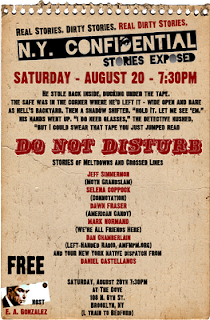 I can't wait for this show. It's going to be a smoky eye/red lip kind of night. Make-up talk!


Posted by Selena Coppock at 7:54 AM No comments:

Monday night was the finale of Ashley’s season of The Bachelorette, and in typical Bachelorette fashion, we were thrown for a loop. When will I learn that these ABC producers are tricksters?

On Sunday night, those rats at ABC broadcast “The Men Tell All” special on a completely random night and without any fanfare. What the heck, ABC? Thank goodness my old Hamiltones friend Ben alerted me, so I could tune in. What went down? Well, William (the wanna-be standup comedian) is still a complete pussface. Nick (poor man’s Chad Kroeger) got hot and his hair is darker now (nice). Constantine looked less ugly than before. That guy Tim who got drunk and passed out on night 1 turns out to be a pretty cool dude with a nice arm tattoo. Bentley was too chicken to come back and face the fact that he’s a sociopath. Ryan is still too smiley and annoying. That’s pretty much it.

NOW FOR THE FINALE!

The episode started off with Ashley roaming the beaches of Fiji by her lonesome. Nearby, her family sat casually in direct, pounding sunlight. Her family is comprised of a lumberjack-like stepfather, a seemingly normal mom, a brunette sister whose body is covered in tattoos, and a brother who probably listens to radio stations that play exclusively “blazin’ R&B.” I can just tell. R&B brother proceeded to wipe sweat off his face with a large towel for the majority of the episode. Wiping one’s sweaty face profusely isn’t the worst thing in the world, I suppose. Especially not when compared to the activities Ashley’s sister. But I’m getting ahead of myself.

JP was up for the family visit first and he made a great impression—jokes all around, cute chit-chat, toasts. Good times overall. Ashley’s sister, Tats McGee (as my best friend Suzanne nicknamed her), didn’t see what I saw (between JP and Ashley) and was very vocal about it. After a quick lunch, Tats McGee, Ashley, and their mother adjourned for a talk during which Tats McGee dropped some bombshells and was pretty harsh. She kept saying that she’s the “rational one” (rational enough to get tattoos on 70% of her body) and that she “just didn’t see it” between JP and Ashley. Ashley was really offended and felt understandably defensive on JP’s behalf. Things only got worse when Tats McGee and JP sat down for a 1:1 talk and Tats pulled no punches. I was impressed with how JP handled her aggressive comments, because I know that I probably would have flipped a table and given her my (patented) horizontal middle-finger. Nonetheless, Tats harsh skepticism seemed to drive a wedge between JP and Ashley and they date didn’t end on great terms.

JP’s misfortune was Ben’s good fortune, as Ashley essentially put on a show for her family once Ben arrived. They were hyper-animated, goofy, and doing dog voices, as if to say, “Hey Tats McGee, ya like this? Is THIS how I act when I’m comfortable? Why don’t you tell me how I act because I don’t know.” Tats McGee had remarked that she thought Ashley was herself when she brought Brad “Hot Dummy” Womack home last season. Really? Throughout her time with Brad, Ashley always seemed VERY anxious, needy, and insecure. Perhaps Tats McGee should go back to crafting herself into Jesse James’ dream date and easy up on the analysis of the “real Ashley.” The family loved Ben, Ben loved the family, and the brother kept wiping himself.

Ashley had evening dates with each of the guys and Ben went first, where he dropped the L bomb on Ashley. She couldn’t reciprocate, but according to Ben, her kisses were intense and were her way of saying, “I love you, too.” (Note to self: That’s never the case.) The next night Ashley had 1:1 evening time with JP and things seemed a bit stilted, still. At the end of the date, JP gave Ashley a photo album with a sweet (and by sweet, I really mean cringe-worthy) message inside.

The next day both JP and Ben met with Neil Lane to go “ring shopping” (more like prop borrowing, but who’s keeping track of multi-million dollar rings? Oh, Neil Lane is.) I had almost forgotten about the final vestige of heteronormative traditions: THE BLOOD DIAMOND! What sham proposal would be complete without a ring for which impoverished children in western Africa probably died? (Yes, I’m getting political up in this Bachelorette recap!) Ben picks an ornate, antique-looking ring while JP picks a trendier, square cut. Just cause I hate diamonds personally doesn’t mean I’m clueless about them.

Finally it’s the big day. Ashley is standing on a runway/stage thing on the beach. Both men arrive by sea plane and, if you’re a Bach die-hard, you know that usually the first arrival is the one who is getting negged. Who flew in first? One half of the Monkey Twins, Ben. I admired Ben’s confidence throughout this journey, but it ultimately made him look very foolish. When he reached Ashley, it was obvious that she was about to start in on the ‘ole “You’re such a lovely person but I would be fine with never seeing you again my life” talk, but he jumped the gun and dropped to his knee, took a breath, and launched in on the proposal. Oh man. Ashley had to awkwardly help him up and try to start explaining, but Ben just said, “That’s that” or something along those lines. Good move, Ben. If somebody isn’t interested, it doesn’t matter WHY. You don’t need to “figure it out.” You just walk away. That’s that. To combine a quote from Bonnie Raitt and another from my great friend Mary Beth, I can’t make you love me and I am who I am without apologies. And we’re done here.

JP showed up next and pulled the “knee drop” maneuver (not to be confused with Sun Drop dance, which features my great friend Maggie Champagne doing it UP in the commercials!), only this time Ashley was feeling it. They get engaged, make out in the ocean, live happily ever after.