Your favorite show is BACK and your favorite Bachelor/Bachelorette recapper, ME, is thrilled to be making her triumphant return to her life's work of shit talking lonely singles while occasionally speaking in the third person!

During last night's premier, I hosted a live watch party at QED, so my notes weren't as insanely detailed as they usually are.  So this recap might be a bit light, but fear not--I'll be watching all season and taking notes, plus tweeting (@selenacoppock).

The show launched with a montage of Becca crying, because every good redemption story has got to "start at the bottom" to quote that song that the kids love and is no longer even especially topical.  We were reminded of the bullet she dodged (a pasty white bullet named Arie--BARF) and given hometown introductions to some of her potential suitors this season.

We met Clay, a former football player who is biracial and has AMAZING arms. Then we met Garrett, a Reno, NV native who JUMPED into frame, which is NEVER a good look.  Garrett seemed very "extra" and I immediately hated him.  Then we met Jordan, a blonde model from Florida (the EPICENTER of modeling opportunities, right?) who quickly started serving up the greatest sound bites of the show. Producers will force Becca to keep him around for a few weeks for his commentary, no doubt.  We also met Lincoln, a super handsome guy with a British accent (he's from Nigeria originally) and great taste in clothes. Up next was Joe, the aww shucks cutie from Chicago who owns a grocery store and who I loved the moment I saw him. Then Jean Blanc, a native of Haiti (who said, "it's not a BLEEP-BLEEP" so I can only assume that Jean Blanc hates Donald Trump as much as I do) who is ALL about scents and I'm here for it. Rounding out those extended intros was former professional football player Colton who is SO DAMN HOT and friendly-looking. He had to quit football because of injuries or concussions or something and it reminded me of when I dated a pro hockey goon who had to quit because he couldn't take any more punches to the face. GOD THAT KIND OF THING IS SO DAMN HOT!!!! Just like, "I used to be extremely violent and now I'm just a sexy assed pussycat," ya know?

Before we knew it, Becca was looking stunning in a sparkly, white dress and waiting in the freshly hosed-down driveway of the STD Shack and it was time to GET THIS PARTY STARTED!

Some of the guys had top notch entrances (Colton with the confetti cannons, John with the sweet story about his grandparents, Garrett with his minivan, Blake and his horse) and some stumbled (sweet grocer Joe who sorta clammed up, the guy who JUMPED OUT from a Hearse and acted like a Millennial girl, David in the chicken suit), and some were downright hard to watch (KAMIL).

Quick diatribe about Kamil's shameful entrance. First off, I liked his style--cool sneakers and a fitted, black suit. Cool cool.  He got out of the limo, stood at the limo door and said, "come here" TO BECCA. Ummm NO. NO NO NO. That aint how this goes down, kid.  I couldn't exactly see what happened but I think she stepped toward him (force of habit when you are socialized to shut up and do what you are told BY THE PATRIARCHY) and then sort of second-guessed herself (relatable) and then he started in on a monologue about how a relationship is a compromise and it should be 50/50 or 60/40. Fuck you. Sure, compromise is important but starting things off by commanding a woman to "come here" is nothing more than manipulation and boundary-testing to see what you can get away with. As Maya Angelou told us, when someone shows you who they are, believe them the first time.  As I always say: goodnight, bitch.

The cocktail party was standard fare, although the drama moved at warp speed, as these things go nowadays.  Early in the night, Chris (a forgettable Rico Suave dude with bad facial hair from FL) confided in his newfound "friends" that Chase (a forgettable Rico Suave dude with bad facial hair from FL) was "here for the wrong reasons" and Chris heard that straight from one of Chase's ex-GFs. Chris confronted Chase about it 1:1 and Chase's self-defense was that this girl wasn't even a real ex, she was a woman he briefly "dated" (probably humped down with for a few weeks), and she was just out to get him. Chris grabbed Becca so that the 3 of them could have a talk and enlighten her. During said talk, as Chase attempted to defend himself from his former flame's disparaging comments, he said "WOMEN" as if to say, "you know how it goes--women are crazy."  Becca was NOT impressed and thankfully, sent Chase home at the close of the episode.

Let's get to the good stuff--the rose ceremony.  But wait, before we do, I must give a shout-out to the former Harlem Globetrotter, Christon, who is not only handsome and well-dressed (I LOVE a man in a patterned shirt and suit), but also dunked OVER Becca and executed that move perfectly.  I hope there are more dunks this season, my friend!  And double-wait, let's talk about JAKE!! Jake is also from Minneapolis and has met Becca MULTIPLE times but doesn't remember ANY of them except for that one at the Christmas party!  He's obstinate and bratty and insists that HE IS HERE TO LOVE BECCA!  Becca aint buying it and she sends him packing IMMEDIATELY.  Perfect move, girl.

OK, soon the sun was coming up and it was rose ceremony time, but nobody was super plastered because apparently the higher ups put a 2 drink MAXIMUM in place after the Bachelor In Paradise DeMario/Corinne debacle.

Pre-rose ceremony, Becca gave Garrett the first impression rose, which means a LOT and MIGHT wipe my memory of him jumping into frame from earlier int the episode--we shall see.  But let's talk about the 'ole line-up, flower hand-off:

-Lincoln (hell yeah! Handsome guy arrived carrying birthday cake!)
-Blake (horse guy, red suit, pretty cute, lil too eager for my taste)
-Rickey (didn't make a huge impression but I can dig a man named after a drink that I love)
-Jean Blanc (buckle up for a season of NICE watches and beautiful scents!)
-Christon (Harlem Globetrotter BAY BEEEEEE)
-Clay (handsome former NFL-er who I'd like to see shirtless within in the next 2 eps plz)
-Wills (didn't make much of an impression, so we'll see)
-Connor (cutey with BIG HAIR up top who got down on a knee and joke proposed when he arrived--cute move, he seems playful and fun)
-Jason (too slick for my taste)
-John (sweet guy who is very well educated, seems kind, will probably not be pushy enough to stick around a whole lot longer)
-Ryan (banjo player who wore an atrocious suit jacket and well, is a frigging BANJOIST--need I say more?)
-Alex (white dude, pink tie, personality?)
-Nate (white dude with blonde hair who arrived in a race car driver suit as a SUPER FUN way to remind Becca of the man who called off their engagement!)
-Trent (legit WHO?)
-Colton (blonde HOTTIE with a heart of gold who I think Becca is wisely putting on the back burner because she likes him a LOT. That's a move we call "pulling a Jojo" and it's brilliant.)
-David (chicken suit guy who, turns out, is a Venture Capitalist Pig, not a chicken after all)
-Jordan (male model who seems VERY SIMPLE and will be providing the color commentary for the next 3 weeks or so)
-Leo (curly-haired stunt man who also gives good sound bite but whose hair is just A LOT--and I say that as a woman who has made out with TWO long-haired mountain men in my life).
-Mike (the other man bun who had the nerve to show up with a cardboard cut out of Arie and that is NOT OK. Don't hang up your hair elastics so soon, bro--you won't be here for long.)
-Chris R. (the Floridian who warned Becca about Chase, but nonetheless rubs me the wrong way).

So who headed home to start their careers as DUFF eyewear brand ambassadors via Instagram?

-Kamil (turns out, commanding a woman to "come here" when she has 29+ other hotties pleading for a moment with her and behaving like gentlemen around her is NOT a great move)
-Jake (hometown loser who seemed ANGRY that Becca remembered meet him and he forgot about meeting her many times)
-Darius (didn't make enough of an impression, I'd guess, cause I can't remember anything about him, either)
-Chase (the dude who was immediately put on blast for having bad intentions. Great move on Becca's part and I'm loving her style--she shoots straight and doesn't entertain drama. Reminds me of Rachel's time as The Bachelorette)
-Grant (seemed a lil intense)
-Christian (who?)

So I believe that she has 21 suitors remaining and this season looks to be a good one.  It seems as if Lincoln will emerge as the house shit-stirrer (pun intended--did anyone else read that weird gossip about him that he may be a bit of a phantom pooper?). Colton will be around for a while and I'm excited for that. Now if only we could get more Joe the grocer in our lives, but we'll have to settle for social media stalking. 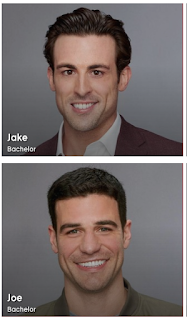 Here we go, season 14 of The Bachelorette!!
Posted by Selena Coppock at 12:31 PM No comments: