It's been a minute!  I'm hanging in there in NYC.  I retired from standup, got a promotion at my job, moved in with my boyfriend (just a few blocks from my old place), and am enjoying Post Vax Summer!

Recently, I had the privilege of chatting with a pal from my hometown (Weston), Fran Racioppi, host of The Jedburgh Podcast. We talked about comedy, feminism, standup vs. improv, punching up/punching down, hustling in NYC, and being open to messages from the universe. It was such a fun conversation and Fran is more than just a former Special Forces Green Beret, the founder of FRSix, and a brilliant public speaker--he's also a wonderful conversationalist and a man who does his homework!

Click on the image here to be linked directly to our episode or look up The Jedburgh Podcast on Apple, Spotify, or wherever you get your pods. It was a really fun conversation.  Tune in! 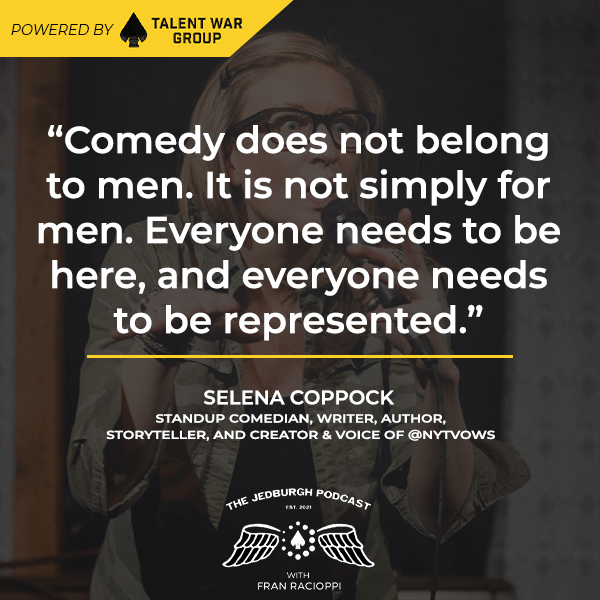 Posted by Selena Coppock at 8:16 AM No comments:

Love bugs!!
Hello hello!! Remember during Clare's season of The Bachelorette (which feels like a MILLION years ago, no?) when I was like, "I'm going to recap! This pandemic can't keep me down!" Hahhahaha what a simpler time.  I was unable to keep up with it and, as you probably noticed, I stopped recapping.  I kept watching and tweeting and posting stuff to Instagram, but I just couldn't write up recaps like I used t
I mean, so much Bachelor Nation engagement happens on Twitter and Insta now--not over here in my blog.  So I'm stepping away from recaps yet again.  I may write random essays on here, though--this blog isn't over, sweet pals.
One thing I HAVE been able to restart is Two Wick Minimum, my podcast about candles.  I hired an Editor/Producer gentleman who takes my Zooms with guests and my intro music and my welcome audio and weaves it into a file!  Huzzah!  I hate technology!  And having guests on via Zoom is SO COOL!  I had on Ken Reid, a Boston-based comedian and super successful podcaster (check out his rad, long running pod TV Guidance Counselor), plus a fellow Brooklyn-based comedian and, most recently an LA-based comedian!  Geography is no object anymore!  Hooray!  Those last 2 eps will be dropping soon.
So, for right now, just about all I can handle is my normal job and my podcast and that's OK.  We're all slogging through a LOT and trying to keep our heads above water.  And right now, all I want to do is watch The Bachelor and fire off some silly tweets and that's all good.
To anybody who is out there reading this, I'm sending you love.  We have all lost so much this year.  It has been so damn brutal with death, hardship, trauma, tragedy, fear.  Just when I have thought that we can't really take anymore and that things can't get worse, they do.  Friends have lots family and friends from Coronavirus, but then also, so many people have died of other things: ongoing medical issues, overdoses, suicide.  It's all just so much.  I'm sorry to be so dark.  This is just to say: I'm sorry, I love you, we're all in this together.
And please listen to my podcast! xoxo
Posted by Selena Coppock at 2:49 PM No comments: