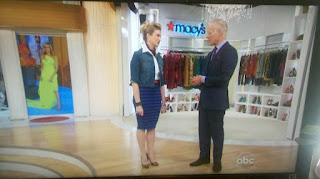 Check that WEAVE! That's me (on the left) chatting with the amazing Tim Gunn on ABC's feelgood daytime show "The Revolution." It was a super fun episode and the hair/make-up guy did me up RIGHT. I walked around with fake eyelashes, a whole face of make-up, and a dope pompadour the rest of that day. Jazzy times!

In heavier news: last night I tried to watch "The Bachelor" but my dang Primetime On Demand hadn't saved Monday's episode. LIFE IS SO HARD! So I haven't seen it yet. I probably won't get around to watching it until this weekend. I'm sorry, lovelies!
Posted by Selena Coppock at 12:40 PM 1 comment:

Last night was an episode of The Bachelor and if twitter is correct, it sounds like there was some serious drama! I haven't watched it yet, but it sounds like Kacie B. made a surprise reappearance in Switzerland. Man, I hate it when a reject does that. You got negged--just go home, listen to "I Can't Make You Love Me" on repeat, drink some wine, cry with friends, and keep on reciting my personal mantra: I'm not going to worry about a guy who isn't worrying about me. Give yourself some tough love and don't waste the pretty (Yes, I just quoted "He's Not That Into You"). Then, from the tweets I read about last night's episode, Nicki got the boot. Yikesaboo. Drama in the Swiss Alps, and it doesn't involve hot chocolate. Sorry that my recap is late--last night I was at Union Hall doing a wonderful storytelling show. But tonight I shall watch the latest Bach episode and a recap is imminent.

xoxo
Posted by Selena Coppock at 7:46 AM No comments:

Last night, shaggy-haired bachelor Ben visited 4 hometowns and ultimately sent one lady packing. How’d it all go down, you ask?

Ben’s first stop was Ocala, Florida, the hometown of Lindzi, the bronzer and flesh-tone lipstick addict. Lindzi was riding a horse when Ben pulled up (OF COURSE SHE WAS), just like when she rolled up to the Bachelor mansion all those weeks back. You like horses, Lindzi. We get it. What we want to know is, do you have any personality traits? No no no—we KNOW that you LOVE horses. Got that part. But is there… anything else? No? Gotcha. Thankfully, Lindzi’s parents are absolutely delightful and I say that with zero snark. Her mom seems lovely and her father is a really sweet, funny, enthusiastic guy. Lindzi and Ben take on Lindzi’s parents in a horse drawn carriage race (standard “meet the parents” activity, no?) and the parents win. After that, they all drink some wine (out of mason jar-style goblets) and chat. Lindzi and Ben explain that they had their first date in San Francisco (and fail to mention that Lindzi was the runner-up pick for that date after Brittney –bad skin, brought grandma on first Bachelor night--opted to leave). They describe their SF date, saying how they went to a Speakeasy and to the City Hall in San Francisco, when Lindzi’s parents both chime in, “That’s where we got married!” Lindzi responds, “REALLY?” Woa—you don’t know where your parents got married? Seriously? Does anyone else find that weird? If I were on a quiz show, and one of the questions was, “Where did your parents get married?” (weird quiz show, I know), within SECONDS I could be like, “Aunt Kate’s backyard in Greenwich, CT--my dad wore a giant, gold tie and my mom wore a straw hat.” I mean, come on. The date seems to go well, and then it’s time for Ben to take the last train to Clarksville. (Yes, that’s a Monkees reference—am I the only one whose favorite Monkee was Micky Dolenz? Just look at that decapitated head!)

Clarksville, Tennessee is home to 24 year old secretary (and Poor Man’s Minka Kelly), Kacie B. To remind Ben of just HOW young she is, she meets him on the local high school football field, where she is twirling a baton and walking among a marching band. Holy statutory rape, Batman! Ben and Kacie B. chat on the bleachers (or is that when I accidentally popped in a DVD of “Friday Night Lights”?) and Kacie informs Ben that her father is a parole officer who doesn’t drink. LET THE GOOD TIMES ROLL! Ben seems completely freaked out and his “deer in headlights” look persists throughout the day and night. Ben and Kacie eat dinner with her parents and sister, then break off for completely forced conversations. Kacie B’s father is, indeed, no bullshit, and he says that Kacie should keep in mind that Ben is dating THREE other women right now, that he would NOT give his blessing if Ben asked for permission to marry Kacie, and he wouldn’t be cool with Kacie moving in with Ben in San Francisco. All are probably good calls, but they upset Kacie and make her seem even more juvenile. Yikes.

Next stop on the Small Talk Train: Ft. Worth, Texas, the hometown of Nicki. Nicki and Ben meet up in downtown Ft. Worth and go cowboy hat and cowboy boot shopping. When Ben is all done up like a cowboy he looks like an absolute tool. After their shopping excursion, Ben and Nicki sit in a park and chat, then head to a compound of McMansions, which is where Nicki’s divorced parents are hanging out (with her pasty brother) so that they can all eat dinner together. I give those parents credit. Dinner goes well, but Nicki’s relationship with her mother is more like best friends forever than mother-daughter. Nicki has a 1:1 chat with her father, during which he gets choked up about her divorce and he blames himself. Aww man—that made me get choked up, too. The Bach is really hitting home on this HOMETOWN episode. Then Nicki and Ben have some 1:1 time, during which she tells Ben that she’s in love with him. He doesn’t give much response, which is kinda jerky.

Finally, Ben heads to Scottsdale, Arizona to find out who birthed Beelzebub, aka Courtney. Courtney greets Ben wearing a white dress and boots, showcasing her completely untoned body. Girl is skinny—I’ll give her that. But she looks like she’s never so much as run a 50-yard-dash or lifted a 5 pound weight. Tone it up, girl! They eat lunch with Courtney’s parents and sister, then break off for more forced chats. Courtney has a chat with her mother and we finally see where Courtney got her weird smirks and pursed lips from. Wow. Courtney’s father opines about marriage to Ben, saying that it’s “life’s greatest gamble” and asking Ben if he’s ready to play. I bet Silver Fox wrote that line WEEKS ago and just prayed that he’d get to say it on camera someday. Your prayers are answered, Sweater Vest! After lunch, Courtney takes Ben to a park where weddings are held and from there, the subtlety only gets subtler. Courtney busts out rings and pads on which they can each write vows, then an officiant appears out of nowhere. So THIS is how you get a guy? I’ve been doing it wrong ALL ALONG! Courtney’s supposedly self-written vows are blatantly plagiarized from “Sex & the City,” which is, ironically, a TV show/movie about female friendship, so I am STUNNED that Courtney has seen it. Ben’s vows are cute and you can see that Courtney is a master of puppets, pulling his strings, just like Metallica said.

Then it’s back to L.A. for a chat with Chris Harrison (who gave Ben nothing but poker face) and a rose ceremony. The girls are dressed up and lined up, and how did the roses get doled out?

Courtney (who is wearing an awful, flesh-toned dress)

Lindzi (who is growing on me and wearing a gorgeous, gunmetal, one-shoulder dress)

and the final rose goes to…

Nicki (looking a little too much like a politician’s wife).

So our beloved baton twirler, Kacie B, is going back to Tennessee. I feel bad for her—she’s a lot of fun and a cool girl. I suspect that the age difference and her parents did her in. So now we’re down to Ben and 3 ladies and they’re headed to Switzerland! Do you think that Courtney has even been there on a modeling shoot? I’m sure we’ll find out soon!

Posted by Selena Coppock at 11:50 AM No comments: