Mama's a lil tired tonight cause I had some wine with family and I've been busy watching Wendy Davis filibuster like a non-peeing wizard on the TX Senate floor, so I'm going to be a bit briefer than usual.  Or at least I'll try.

This week the crew is in Munich, Germany and there will be 3 dates with roses up for grabs on all of them.  A single 1:1 date, a group date, and the dreaded 2:1 date which is the definition of awkward (and makes for hella dope television).

The 1:1 goes to Chris (dude who used to be just a pasty nobody, but emerged kinda late in the game and appears to have a personality despite his penchant for poetry) and he and Desiree explore Munich with just a phrase book.  They laugh over the fact that they have NEVER used maps (huh? Townies for life?) and pose for photos alongside a bizarrely painted, white midget.  Oh Germany, you just never stop living up to your strange German stereotypes, do you? Check the pic: 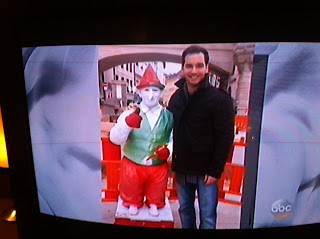 Chris & Desiree eat sausage, try on lederhosen, dance horribly AND THEN BRYDEN SHOWS UP!?!?  What the EFF!?!?  (Note: Bryden is the Iraq War veteran who recently discovered hair gel and I'm elated that he did.  Also, he's been brooding lately--Brooding Bryden--because he's not sure if he still likes Desiree anymore.  So OF COURSE the producers are like, "why don't you NOT wait until an opportune time to bow out, but rather disrupt the lone 1:1 date to step away from this love contest?)  Brooding Bryden disrupts the bad dance-off (thank goodness) to take Desiree over to some steps and drop her like a hot assed potatoe without bacon bits & sour cream (so really, a potato worth eating--but don't you DOUBT for a MINUTE that I love potatoes cause I'm Irish as shiiiiit! Boston Celtics baby!  I once dated a guy with a fighting Irish tattoo AND 3 Celtic design tattoos, that's how much I love potatoes).  Did anybody else notice that as Bryden approached Des & Chris, we heard the Intervention music (from the KILLER TV show "Intervention" on A&E) from when the subject would be walking into the Holiday Inn or Comfort Inn or whatever for their "final interview"?  I could call that shit at 50 paces!  Desiree handles the dumping well (I mean, gurl got dumped mid-date, how else can you handle it?) and she and Chris drink, then he reads her a vomit-worthy poem.  He gets a rose, they make out, then they dance to a live performance by Matt White, who is, presumably, famous.

Meanwhile back at the hotel suite it's like a meeting of the Hoodie Club and the group date card arrives.  Who are the jags who will be getting 30 seconds of hang time with Desiree if they're lucky?  Juan Pablo (father but more importantly, hot, spicy dude), James (The Don), Kasey (#HowAreYouStillHere), Zak (how is HE still here?), Brooks (dude must be a wicked good kisser cause he reminds me of a dead fish who is somehow also human--but not like, a Merman--just a dead fish/human), Drew (squeaky clean hottie with a jaw that could open a can of sardines if ANYBODY even ate sardines anymore--why do we keep talking dead fish? Cause I'm writing this tipsy & late? PROBSIES!), and last but not least, the man who is my first, my last, my EVERYTHING: MIKEY T!  (Can you tell that I'm setting up for heartache here?)

The group date is a day of fun in the snow (aka my own personal hell) and the crew ride a tram up to the top of a mountain, sing with a yodeler, and obviously received free Ray Bans before this whole event.  Seriously--they looked like a creepy Ray Ban cult.  (If only the Branch Davidians had been so stylish, am I right?)  They went sledding on tiny butt covers that caught speeds the likes of which I haven't seen since National Lampoon's Christmas Vacation (when Clark used that new spray on the bottom of his sled and friggin' FLEW).  Post-snow play, the crew retired to an igloo hotel that resembled Superman's home planet from that old 1980s version of Superman (if my memory serves) where Desiree smooched both James and Brooks.  I think that Brooks might be like Arie from Emily's season--a dude who looks like a pasty corpse but must be an AMAZING kisser.  Mikey T. and Desiree get some alone time, during which she asks him if he'd ever leave Chicago and he makes comments about them having 5-10 children.  Yikes.  Desiree has some alone time with Zak (aka Andy from "The Office") and he shares the fact that a decade ago he was on a path to become a Priest, but had an epiphany on a mountain Germany and decided NOT to do that (did your decision to become a reality TV tool come right after that, or later, Zak?  Guess we'll never know).  The crew gathers back in the igloo-style night club and Desiree hands the rose to Brooks, proving again that Desiree's "type" is the opposite of my type.

It's time for the 2:1 date and the two gladiators hate each other (OF COURSE THEY DO): Chunky Swayze (Michael) and Ben (America's worst father).  Chunky Swayze plans to use some of his attorney tactics to expose Ben as a fraud and Ben is just rolling with the punches and insisting that for him faith and family are the most important things.  Yeah, sure they are.  So important that you haven't called your son ONCE in the past 5 weeks and you were the ONLY guy who didn't bother to attend Easter Sunday church service (Chunky Swayze managed to gather that information during cross examination aka hang out time).  The awkward trio suits up in bathing gear and hops in a "Hot Tugg" (not as dirty as it sounds), which is a hot tub that's also a boat that you can zip in on a chilly lake.  Pretty dope, no?  During that Hot Tugg adventure, Chunky Swayze asks perfect questions and gives Ben juuuuust enough rope to hang himself with.  Ben literally says that it was God's plan for him to get his baby mama pregnant but NOT marry her.

That night over dinner, Chunk Swayze lays it on a LITTLE too thick and Desiree changes the subject, but not before Ben storms out and paces around outside.  Desiree follow him out (OF COURSE SHE DOES) and he explains that he's so thrown off because, as he says, he has "never had someone question my faith... or me as a father."  SERIOUSLY, dude?  NO ONE was like, "oh you're going to showcase your INFANT SON on episode 1 of The Bachelorette and have him walk into the arms of a stranger as your entree into her heart?  Are you sure that's a great idea, father?"  Ben plays the religion & family cards HARD and Desiree straight up laughs in his face.  Then Des and Chunky Swayze have some time alone, during which he levels with her: Ben has talked about his desire to be the next Bachelor and how he could follow in the (pretty shameful) footsteps of Brad (who did The Bachelor TWICE and still doesn't know how to be in a relationship) and use the notoriety to grow his bar business.  Finally it's rose time on the 2:1 and who scores it? CHUNKY SWAYZE!  Aww snap!  Unprecedented! (That was for you, Joanna!)  I was bracing myself for Chunky Swayze to get the Heisman much like that cute blonde who tried to warn Ben that Courtney was Beezlebub (sp? I'm tired & tipsy--you know what I mean--Satan) back during that season (remember her?  The blonde chick--she was a rad scientist, killer body, super cool, and got friggin' HOSED for warning Ben!) and had a target on her own back because of it.  But Desiree's a smart cookie and she tossed out Ben, thank goodness.  He got up & hustled out right away (what a class act!  Didn't bother saying goodbye!), then in the limo he immediately made a comment that he would have been a great next Bachelor ("single father from Texas--are you kidding me?") and then asked the crew where they were going to get drunk.  Ciao!

Finally it's rose ceremony time and information has emerged that James (The Don) is here for the wrong reasons.  Brooks & Drew overheard him say it, so it must be true.  That will come to fruition next week, but in the meantime, what went down at the rose ceremony?  Chris, Brooks, and Michael (Chunky Swayze) already had roses, and who else got 'em?
-Zak (are you KIDDING me!? That dude is the OPPOSITE of HOT or COOL and I don't mean he's lukewarm (also, I don't know how temperatures work): he's a friggin' tool!)
-Kasey (#IsThisAJoke? #GetAHaircut #TakeAValiumThenMaybeYou'llBeLessAnnoying)
-Juan Pablo (guy is hot... but seriously--you think there's a future there?)
-Drew (dude is pure as the driving or driven snow, whatever it is, and I kinda like it)
-James (The Don, who wore a TINY scarf this episode and looked like a monster because of it)

So who's hopping on the 'ole Shitbag Rejection Bus to the AirTran Shuttle (can't use your monthly MetroCard on that one, jerkwad) to a flight on See Ya In Hell Airlines, seat for 1?  MIKEY T!!  Yes yes, my sweet beloved meatball made of dimples and sick biceps.  Somehow Mikey is shocked by this, despite the fact that he never so much as KISSED Desiree.  Aww Mikey.  Go back to Chicago where you will pull tail from South Loop all the way to Wrigleyville.  I hope to see you there this weekend (seriously, I'll be in Chi town doing a set at the Laugh Factory Friday, then at the American Library Association conference--see my "Gigs" page for more info).

Next week Des & the boys jet off to Barcelona for a whole lotta tears!  See you then!  xoxo

Posted by Selena Coppock at 9:23 PM