Last night's episode included all of the favorite elements that are beloved by the Bachelor die-hard community: a disgruntled ex-girlfriend, a broken finger, and men whipping balls at other men.  As Shitty Kasey would say, I was in #HEAVEN!

Chris Harrison laid out the week's events: two group dates and a 1:1 date with roses up for grabs on all.

The first group date crew was Chris (pasty), Brian (snooze), Drew (squeaky clean cut), Michael (Chunky Swayze), Brooks (lil effeminate and it's only going to get worse on this date—you'll see), Brad (brick shithouse who's hot but bland), Brandon (motorcycle dude who is VERY emotional), Zack K. (Chuck Taylor-wearer), Ben (the guy who sucks even MORE than the other sucky dudes), and last but certainly not least, my beloved MIKEY T!!!

The dudes reported to a gym where they were greeted by super serious members of the National Dodgeball League.  These members acted like they were digging drainage ditches in Rwanda with how seriously they took their dodgeball games.  After the boys received some lessons in dodgeball (because apparently they never attended gym class or recess?), Chris Harrison arrived to split them into teams for a public dodgeball tournament.  The teams were "randomly picked" but just happen to pit Mikey T. and Chunky Swayze against Ben, so this "random selection" feels about as random as the list for the Tuesday Treehouse Open Mic circa Sue Funke's reign.  (Yes, that was a joke that only 5 readers will get, but I'M MAKING IT ANYWAY!)  The teams suited up in red or blue daisy dukes, knee-high socks, and sweatbands then made a dramatic entrance into the cage where they would play.  Chunky Swayze explained that it's a really intense cage match, saying, "this isn't your grandfather's kind of dodgeball." No, Michael, it's not.  Your grandfather probably NEVER played dodgeball, as he was a lil too busy fighting the Nazi's in WWII then coming back home to a family of 6 who needed to be fed and a lawn that had to be cut by a push mower and his ONLY relief was a beer or two at the VFW hall on Friday night.  No, I have a HUNCH that Pawpaw never dallied in a child's sport that overprivledged adult-children have co-opted.  But I digress.  (Wow—that greatest generation diatribe might make you think that this blog is ghost written by Tom Brokaw but I assure you IT IS NOT!  Brokaw knows NOTHING about Bach!)

It was an intense, best-of-three tournament and after game 2, the red team had won 1 game and the blue team had won 1 game.  It was all down to this and Brooks ATE IT at the opening whistle.  He somehow managed to bust his finger and was taken away to the hospital.  Desiree held his hand for a second and then watched the finale of the 3rd game, which was Chris vs. Zack and there was a mention that both of those guys were former pro baseball players.  Huh? Umm… maybe I DON'T hate you both anymore.

The blue team won and Desiree announced that both teams are invited to the after party, so all that effort was really for naught (man, I haven't seen a mind fuck that bad since I pledged Alpha Theta Chi and we were always made to feel like all the sisters hated us, but they actually didn't!).  Brooks missed most of the after party because he was at the hospital having his broken finger reset, fainting from the resetting, then dealing with a videocamera in his crotch.  At the after party, Brad (built, quiet) pulled Desiree aside to reveal that he has a 3 year old son named Maddox (insert Jolie-Pitt family joke here), his ex had a drinking problem, and he got arrested for domestic violence because of a scuffle they had.  YOWZA!  You're really giving Ben and Brandon a run for their money when it comes to bombshells!  Chris (pasty) whisked Desiree away to the helicopter pad/roof where they had some alone time and Chris showed that he's more than just a pasty random with the worst body in the house.  Not so fast, Chris—guess who's back from the hospital and thinking that his injury will mean that Desiree is wrapped around his broken finger? BROOKS!  And he's got to hold that finger upright to prevent painful blood flow to the tip (I've been there--no joke--long story), so he's looking like he's giving the #1 sign 24/7! 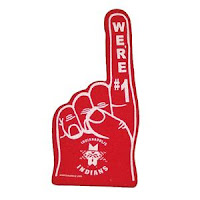 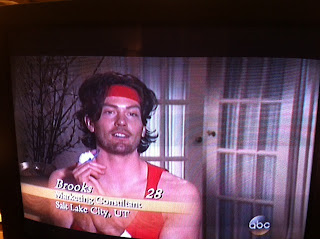 Desiree and Brooks had a sweet conversation and make-out, but when it came down to rose time, Des gave it to CHRIS! The pasty nobody who needs to invest in an ab roller or just do some sit-ups once in a while! Aww snap!  Unprecedented!  Sorry Brooks, but breaking your finger won't always get you the girl.  The rose meant that Chris and Desiree got a private serenade by a sappy singer and Brandon watched from an onlooking patio (like a sniper) as Chris & Desiree made out.

The next day, Desiree was "surprised" by a phone call (wow is that girl a bad actress) from Chris Harrison and told to head to the Bachelorette mansion.  There, she took Brian (snoooooze) outside and asked him if he's there "for the right reasons."  He went on and on that he is, then Desiree said that she's confused because Brian's girlfriend is here to confront him.  Aww snap!  In walked Stephanie (a cute brunette single mother) who LIT INTO Brian and said that they were together (cough--in bed--cough) 2 nights before he came on The Bachelorette.  Stephanie has a son named Donovan who apparently looks up to Brian (he aspires to have a SUPER bad personality?) and I just feel bad for the tyke that his name is Donovan.  For Brian's sake, I can't decide what is worse: being outed as a JERK on national TV, or having it happen while you are wearing black ankle socks!?  Seriously people--black ankle socks are DISGUSTING.  Brian was promptly asked to leave Bach land and the other guys were flabbergasted.  Brandon cried over the whole display because he was raised by a single mother and men would come in as father figures and then leave without saying goodbye (like Brian did to Donovan).  Oh Brandon, you're so sweet and your feelings are completely understandable and valid (who's got 2 thumbs and LOVES therapy!? THIS GIRL!) but seriously--talk to a therapist about these feelings of rejection and shame--not directly to a TV camera.

Kasey (#Loser) gets the 1:1 date after that scene and their activity was dancing against a building (harness, leggings, and all).  It was pretty lame and Kasey continued to be an annoying tool, but he somehow scored a rose.

The final group date is Dan (Ken doll-like helmet-like black hair and bright teeth), James (The Don), Juan Pablo (spicy!), Bryden (Iraq vet), Zak W (pity bid who is more like Andy from "The Office" every time he opens his mouth) and they reported to a wild west-type set.  Desiree was there in a hoop dress that The Don describes as "a beautiful gown from the 1900s" which could mean be a flapper dress or a Twiggy-style shift dress or a 1980s metallic prom dress, but who cares?  The guys dressed up as cowboys and learned stage combat and stunts in cowboy boot camp.  Juan Pablo earned the ranger badge so he and Desiree got some alone time to watch the trailer for "The Lone Ranger" and make-out while eating popcorn.  It's like an 8th grade date!

Somewhere in between the cowboy boot camp and the afterparty, Bryden seems to have been introduced to hair gel is and he looks SO MUCH BETTER!  Push that hair to the side and lock in that style, Army man!  Desiree and Zak had a chat and he's SO not sexy it's stunning.  His days have GOT TO be numbered.  The Don revealed that his father is very ill and he misses his family (of course he does! They're the mafia!), so Desiree gave him a rose to reassure him.

The next day, Desiree hung out with the guys at their pool and when she first pulled up in her car, Ben snuck out and whisked her aside for some 1:1 time.  He then denied doing this to all the guys in the house and  guess who knew the truth and wasn't having it? MIKEY AND CHUNKY SWAYZE!! Hell yeah!  Ben sat there in a bizarre tank top while Mikey and Chunky Swayze berated him--it was delightful.  Meanwhile, Brandon was practically WEEPING to Desiree about how upset he was by the single mom/Brian situation. Oh sweet Brandon--please tone it down.

Finally, it's rose ceremony time.  Who has roses already?  James (The Don), Kasey (#EatShit), Chris (pasty).  Who scores a rose from Desiree at the ceremony?
-Bryden (I see BIG THINGS for him now that he knows how to use hair product)
-Juan Pablo (their make-out seemed hot, despite the popcorn mouth)
-Zak W. (HOW LONG WILL THIS CHARADE GO ON!? Guy is a joke!)
-Brooks (a busted finger gets you the sweet 7th rose--ha!)
-Drew (babyface, had a quiet week)
-Zack K. (Chuck Taylors still flying under the radar)
-Brad (he may look like a dumb lug, but now he's a dumb lug with a kid!)
-Michael (aka Chunky Swayze who kinda needs a haircut)
-Mikey T (HELL YES! I adore him but I fear that he and Michael are sliding into the Friend Zone)
-Ben (smug sociopath who everybody hates, including America)

Who's hopping on the shit train back to Rejectionville? Dan, who never revealed much personality, and Brandon.  Oh Brandon.  Brandon says that his heart is broken ("smashed by a hammer") and straight-up asks Desiree what went wrong.  She responds, "chemistry."  Ouch.

Next week they posse is heading to America's favorite playground when Las Vegas is just not in the budget, ATLANTIC CITY!!!

Posted by Selena Coppock at 9:40 AM