We're down to lucky 13 dudes and this week's theme is like a combination of that DOPE song by Bruce Springsteen ("Meet Me Tonight in Atlantic City") and that episode of Sex & the City when the ladies take a road trip and Charlotte dresses like a white trash sluuuuuut, Samantha's expectation that Richard will cheat on her gets the best of her, Carrie eats a bunch of salt water taffy and has unruly curls, and Miranda... oh man I can't remember, but she probably does something wildly boring OR she finally lets loose.  Either way, it was Bachelorette party time in AC, baby!  ATLANTIC CITY!

The first 1:1 date goes to Brad (has a kid and a lil' bit of a criminal record but it's TOTALLY NOT HIS FAULT, guys! Those domestic violence charges were bogus!) and the note says "let's let our love shine through" so you know what that means?  Chilling in a lighthouse!  But first, Desiree and Brad tackle a montage's worth of requisite boardwalk date activities: they ride a slingshot nightmare trap thing, they ride a rollercoaster, they walk along the boardwalk, and generally engage in enough activities to hide the fact that Brad is boring and Desiree is a poor man's Katie Holmes without even the (minimal) personality of friggin' Katie Holmes.  They bust into a candy factory (what is this, a bland version of "I Love Lucy"?) and I'm sure the staff is THRILLED that these two lovebirds are NOT wearing regulation hair nets while they snatch chocolate candies right off the conveyor belt.  Do what you want, jags!  Brad and Des enjoy cocktails by a ridiculous sandcastle (see below) but Brad's "personality" just doesn't exist, so Des dumps his baby daddy ass at the top of a lighthouse.  Brad walks back down the stairs alone and then cries.  Peace out, pussycat. 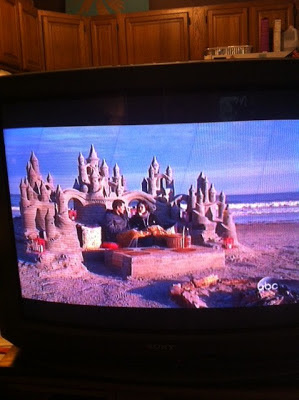 Up next is a group date and the posse is Brooks (SO effeminate STILL!), Bryden (Operation: I-Sexy Freedom), Zack K (Chuck Taylors), Kasey (#PleaseShutYourFace), Drew (squeaky clean hottie), Juan Pablo (Foreigner is a rad band and this dude is a hot foreigner), Zak W (his existence is a friggity JOKE!), Mikey (hell yes I LOVE YOU FOREVER my sweet meatball), Michael (Chunky Swayze lookin' good), Chris (he's growing on me), and Ben (lawdy lawdy the worst guy ever--get a SINGLE angular feature, wouldja?).  They report to downtown AC and learn that they will be participating in a Mr. America pageant in front of a live audience!  They're in good hands, though: they will be trained by a hot blonde (what what) who is the present Miss. America (of course she is--BLONDES RULE!) and a lovely, uber gay pageant coach guy.  The dudes practice for the assorted challenges: interview, talent, and swimsuit.  Perhaps they were feeling inspired by their gay pageant coach because most of the guys went for VERY effeminate talents: dancing, baton twirling, and general high heel wearing for no reason (Chris).  In the interview portion we learn that Juan Pablo has a daughter (odd time to drop that tidbit, JP) and that Mikey T wants the world to know that he's a sensitive guy deep down (how about you keep that to yourself and just keep showing off your tats, mmmmK?).  Ben performs a ribbon dance (what is this, Get In Shape, Girl?), Drew recites the most cliched Shakeapeare scene ever (friggin' Romeo & Juliet), Bryden thrusts his junk directly into the face of Atlantic City's mayor (one of the judges), and Zak W (aka Andy from "The Office") plays a heartfelt love song on the guitar.  At the end of it all, Kasey (hashtag tool) wins the contest and the prize is nothing--CONGRATS, KASEY! #EatShit 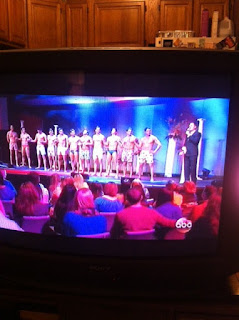 At the Mr. America after party, pretty standard stuff goes down: Ben reminds America that he's not here to make friends, all the other guys stew over how much they hate him, Zak W remains clueless about how much is too much and serenades Desiree further.  At the end of it all, Desiree decides to give ZAK W. the rose and BLOWS MY MIND!  Talk about a pity rose for a guy who she thinks is "just a super NICE guy!"  Blech.

The final date is a 1:1 between Desiree and James (The Don) during which they witness the devastation that Hurricane Sandy wrought all over New Jersey.  It was pretty sad to look at all of those destroyed homes, but that didn't stop James from being wicked handsy with Des.  They took a walking tour of Seaside Heights with a woman from the Red Cross and even met a sweet couple (Manny & Jan) whose home was wrecked by Sandy.  Desiree and James gave that couple their romantic date (of COURSE they did!) and the couple went off for a lovely dinner in AC while Des and James ate at a pizza place nearby.  During dinner, James admitted that he had cheated on his ex-girlfriend and gave himself a LOT of credit for experiencing a broken heart (of his own doing? Huh?) from that situation.  They met back up with Manny and Jan and the two couples headed into a ballroom to see a performance by country music's newest "hit", Darius Rucker!  Yes, the dude from Hootie & the Blowfish--I KNOW!  Oh man I want to give him a chance, but I don't know.  I love me some country, but Darius Rucker?  Seriously?  Manny and Jan slow dance to Darius Rucker like they've heard of him while Desiree gives James a rose.  Both couples end up on the dance floor and do a little "keys in the bowl switcheroo" (not quite, but how NUTS would that have been?) and Manny dances with Des while Jan dances with The Don.  Intergenerational mixing & mingling!

Finally, it's almost rose ceremony time and the group of 12 dudes (since Brad got the Heisman) will be pared down to (this one goes to) 11 by night's end.  Bryden is having doubts, which the producers are LOVING. During cocktail hour, Chunky Swayze trots out a corny game using the letters of Desiree's name to describe Desiree (have you been getting dating tips from a 5th grader, buddy?) and Bryden admits that he's been struggling.  Dude, if you can make it through serving in Iraq, you can survive sharing a house with a gang of losers (lead by Ben & Kasey).

It's rose ceremony time at long last!  The Don has a rose and somehow, so does Zak W, so who else scores flowers?
-Chris (pasty poet who used to play pro baseball)
-Brooks (seriously? Dude is a 2nd runner up to Zak W in the anti-sexy category)
-Juan Pablo (I've been waiting for a girl like you.... FOREIGNER IS A GREAT BAND!)
-Drew (dude said both "banana hammock" and "Tom Foolery" this episode, so I'm digging his style)
-Michael (Chunky Swayze finally made out with Des this week! Nice work!)
-Ben (your face is what we call "fat skinny" and I want to roundhouse kick it)
-Kasey (they don't grow 'em much more annoying than that hashtag expert)
-Bryden (the producers did some tricky editing to make it seem like Bryden almost negged the rose--yikes!)
-Mikey T (last and DEFINITELY NOT LEAST!  I think he's not Desiree's type, but lawdy LAWDY he's my type.  Macho, tattooed, kind of a simpleton--matchmaker, matchmaker you made Selena a match!)

Who's hitching a ride on the S.S. Self Doubt without a life jacket?  Zack K, a guy who never revealed much personality and we knew only as "Chuck Taylors" on this here blog.  I'm sure he was nice, blah blah blah, and I'm sure that Zak W. is thrilled that he's not the last Zak standing.  The Zack attack is over and somehow the bigger tool came out on top.  Ahh love, am I right?

Next Monday's episode take the harem to Munich, Germany.  I'm just praying we see Mikey T. in some tight leiderhosen.  What did you think of this episode?  Do you hate Ben as much as I do?  Am I overly harsh on Kasey?  Please feel free to comment!
Posted by Selena Coppock at 8:33 PM