Bachelorette Kaitlyn Ep 9: That Dress, Though!

As always, I'm late with this post.  I'm currently in Springfrield, Missouri for my sweet grandmother's funeral, so that is why my recap is a bit delayed and it will be a quickie.

I did a video recap for AOL Rise on Monday night and you can watch it here.

My thoughts on Monday's episode in rapid-fire, bullet format:

-Ben H. looks like Peter Brady, sure (is that a good thing?) but I'm still surprised that he's a contender.  Their row boat ride gave me flashbacks to "The Notebook."
-When the date card arrived and Jared attempted to explain the REAL definition of "run amuck" to the guys, I was stunned.  He managed to hide it all season but in that moment we learned that he is an IDIOT with no idea what double meanings are! Bah!
-Hell yeah Kaitlyn for saying "I'm a grown woman, I can do what I want" and not coming off as regretful about HumpGate, but just thoughtful about the implications that it will have on her other relationships.  She is dealing with this whole situation brilliantly.
-Sweet Joe turned into Curt Joe the moment Kaitlyn dropped him and I can't say I blamed him.  Their relationship simply started too late, but that final scene was painful to watch.
-Shawn looks more and more like a knot with each passing episode.  I appreciate when he responded to HumpGate by needing time alone and then saying that he needs to "man up" and simply push forward and focus on HIS relationship with Kaitlyn, but was disappointed when he backpedaled from that and let his jealousy take over later in the episode.  Dude, run your own race.
-Can we talk about Kaitlyn's silver, mirror dress from that rose ceremony and how it was disco perfection?! I WANT THAT DRESS! Was Mirrorball a Sarah McLachlan album circa 2000-something, or Kaitlyn's dress from the rose ceremony when she sent Jared packing? 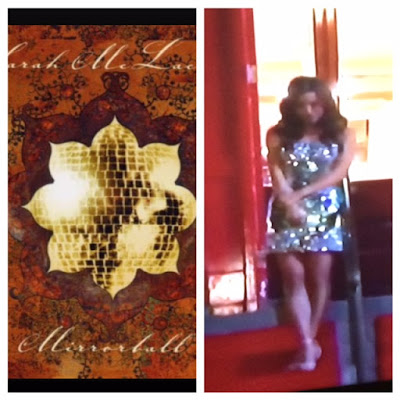 -Nice attempt at a power play during the rose ceremony, Shawn.  Blech.  Stop trying to have the upper hand by being sad that your GF slept with someone else and manipulating her emotions with your sadness.  Sack up and move on, or walk away.
-Jared's rejection: what a class act!  He holds it together, acts like a gentleman, and wishes her all the best.  I'd like to take breakup lessons from Jared.  Although, I think I handle them pretty well.  The last time I got dumped I just said "OK" and the conversation was over.  Who needs to talk it out?  I'm a WASP?  I'll drink a white wine spritzer through this heartbreak, thank you very much!
-Does Shawn do anything OTHER than brood and stare off?  Bicep curls, obviously, cause those tight henleys aint getting snug without some serious bicep curls and triceps kickbacks, but anything ELSE?
-Nick and Kaitlyn's fantasy suite dated looked like a really good time--those two crazy kids have great chemistry (sorry, Shawn).

Can't wait to watch Shawn and Nick argue about the fact that they hate each other next week! xoxo
Posted by Selena Coppock at 1:54 PM