On Monday night’s episode of The Bachelorette we had 0 rose ceremonies, 1 departure, and 1 ARRIVAL.  WAH!?!??!  I know.  Hold onto your hats, love bugs.

The last episode closed with the Clint cliffhanger—would Kaitlyn finally wake up to his sketchy ways? Would he and his shiny forehead manage to fly under the radar and stay in the house with his beloved best friend forever, JJ?  On Monday’s episode, Kaitlyn pulled Clint aside and shot him straight—she doesn’t trust him and a ton of guys have warned her about him. Like a blonde, monotone robot, Clint insisted that he is there for the right reasons, that he had made himself vulnerable to Kaitlyn and that’s scary for him, that she's shy, and that he’s “best, best, best friends” with JJ. Smart cookie Kaitlyn informed him that this has nothing to do with his friendship with JJ and that he needs to go home. They walked back into the house where Clint asked the entire crew, “who talked to Kaitlyn and said that I was mean to you guys?” which is a worthwhile conversation to have as the door is hitting you on the way out, huh?  Not so much.  Kaitlyn apologized to the group (just like the Amy Schumer sketch) and then JJ chimed in to say that CLINT owes everyone an apology for causing drama and wasting their time.  Oh JJ—you’re such a stupid kiss ass. You’re totally the pity bid of the house who can’t bother to do the actual tasks asked of you but instead focuses on winning extra credit and brown nosing. Blech. No wonder you’re a FORMER Investment Banker, chach. Even Investment Bankers don’t like you (and that’s saying a lot, right Corey?).

Clint was shocked to be thrown under the bus by his bestie and the two of them had a tense, private conversation during which each admitted to the other that he had “told you things that I haven’t share with anyone in a long time” and Clint exited by mocking JJ’s tie (ZING!) and calling him a “Beeping piece of Beep.”  JJ then wept for the camera, walked off camera and slapped himself across the face, and said to him self “son of a bitch… suck it up.” Yowza. Methinks somebody grew up in a house where emotions weren’t permitted, and it’s pretty sad for JJ.

Tanner might be a thin nosed loser, but kid is a wealth of comic relief with his comment that “Broback Mountain became Broback Volcano and erupted.”  Ian tells JJ that his behavior is despicable (hell yeah it is), Kaitlyn cancels the rose ceremony, and the gang learns that their next stop is New York City!

In NYC the crew stays at a hotel in Times Square (my sincere condolences, boyz) and has 2 group dates and a 1:1 date.

The first 1:1 date was a rap battle (and it was just as bad as you’d expect, despite Doug E Fresh’s best efforts) of Jonathan (Color Me Badd Miami Vice), Justin (whose hair is growing our horribly), Ben Z. (brick shithouse of love), Corey (current investment banker), Ryan B. (who looks cute in glasses but is highly forgettable), Tanner (whose sole purpose on the show is to make good sound bites), JJ (no one clapped for him—haha! Eat it, loser!), Shawn (who looks a lot like Justin, but hot).  They guys perform a live show and Ashley I. (female Bobby Bottleservice from the previous season of The Bachelor) is in the audience, along with Nick (2nd runner up from Andi’s season).

Nick takes Kaitlyn aside after the concert and asks if he can jump into the fray and be a suitor because “the idea that you could potentially be engaged and I wouldn’t have met you bugged me.” But isn’t that the case for ANYONE IN THE WORLD, you boundary-less jackass? There are TONS of people out there who you might be friends or acquaintances with and that doesn’t mean that you get to interject into their lives and be like, “hold up—I know you’re in the thick of the biggest adventure of your life and you’re presently dating a dozen dudes, but you have simply GOT TO TRY dating me!”  Fuck off.  It’s a pretty standard Bach franchise maneuver now (almost every season some jag wad who can’t get over his/her time on the show and simply GET A FRIGGIN’ JOB will show up unannounced mid-season) but it still sucks and the message is, “I have no boundaries and I didn’t bother going after you when you were free and a normal person who had done the show, but now that you’re THE Bachelor or THE Bachelorette, I want in and you should thank me for it.”

Kaitlyn thinks about it and even goes to Ashley S. (total kookoo bird from her season) to get her hair done and talk about love vs. lust. Oh man, Bach contestants live in a full Bach world! The hairdresser is a Bachelor alum! Another Bachelorette alum wants to date you!  Where’s the Bach alum butcher, baker, and candlestick maker?

She decides to go for it and let Nick join the show as another suitor.  The way that Kaitlyn and Nick’s kiss and hug does NOT look like two people who connected via social media, as she claims.  Who knows.

Justin scores the rose after the rap battle/tense evening on the boat, but as Tanner says, “that’s the most meaningless rose in the history of the show” in light of the fact that said rose was given out just after Kaitlyn told the boys that Nick would be moving into the hotel suite.

Jared (Rhode Island’s finest restaurant manager) scores a 1:1 date and the couple gets decked out for dinner in the Metropolitan Museum of Art then a helicopter ride over NYC.  Jared get a rose. Somehow, rodent-like Jared is growing on me but he still feels like Aidan to Nick’s Big. Damn you, Nick!

The next day is another group date and the crew is Ian (can the hottest suitor please get more screen time, ABC?), Chris (dentist dweeb), Joe (Squished Face), Joshua (simpleton redhead), Ben H. (button nose, personality still MIA) who are going to BROADWAY to walk through a real Broadway audition!  The dance captain who taught them the choreography might be my favorite person ever and during the try out, Chris the dentist does his best impression of what he thinks an actor does (ACT! WITH BIG FACIAL EXPRESSIONS AND HAND MOVEMENTS! LOOK OVER THERE, MY FAIR LADY!) and his over-acting is rewarded when he wins the challenge. Kaitlyn and Chris then make their “Broadway debut” (as extras in a group scene) and—I’m shocked to admit this--Chris officially looks better in a cupcake then he does in a turban.  Post-show Chris and Kaitlyn head up to a rooftop and smooch beneath the New Year’s Eve ball in Times Square.  He gets a rose.

Meanwhile, weasely Nick is making his way to the Knickerbocker Hotel (where, let’s be honest, he was probably shacked up on ABC’s dime anyway, but they need shots of him “arriving” so he roams around Times Square with a suitcase looking strangely forlorn about his impending love connection).  He does a good job of channeling Bill Murray from Lost In Translation and looking pensive, when we all know that he has never cared about making friends. HE’S NOT HERE TO MAKE FRIENDS! Ahh—the reality TV dating cliches just won’t stop! 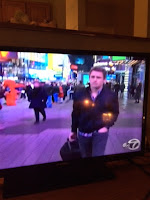 The episode ends without a rose ceremony, but instead with another cliff hanger when we watch Nick go enter the suite and say “what’s up, guys.”  We'll find out what goes down next week and I'm excited to watch some BRAWLS!

Posted by Selena Coppock at 9:07 AM