Bachelor Arie: HOMETOWNS: Arie gets GRILLED by the COOK SHACK

Monday night gave us one of every Bachelor fan's favorite episodes, hometowns.  The 2 hour spectacle in which 4 newly-minted couples (from a group that totals 5 people) take their love off the road and back home for Mom + Dad + every random aunt or uncle within the state to gather 'round and scrutinize.  This episode took Pasty Snooze Arie from Los Angeles, CA to Weiner, AR to Minneapolis, MN and finally to Virginia Beach, VA.  Then back to Los Angeles to turn one lucky into an Instagram celebrity/Bachelor In Paradise participant!  Who was the lucky gal who avoided Arie's grasp?  We'll soon find out!

The commercials made it seem as if every family would DETEST Arie and lemme tell ya, I was ready for it.

First up was Kendall, a native Angelino, who dressed up in a daisy duke romper (contrasted with Arie's dark jeans, plain navy T-shirt) and took him to a "taxidermy room" also known as a terrifying storage shed chock full of dead animals that are pumped full of glue!

Kendall shares the great news that they will be "mounting" their own taxidermy--is "mounting" what they call it in the 'Dermy World? In my day, "mounting" was more about hooking up and less about dead animal skins, but what do I know?

Arie and Kendall "mount" these dead animal skins and I have seen some bizarre and occasionally gross stuff on The Bachelor before,  but NOTHING like this.  Arie and Kendall mount some rats and I'm sure they picked an animal that most Americans find disgusting to avoid controversy (am I overthinking?) then they put their dead rats into FORMALWEAR and placed them in a diorama of PARIS by moonlight.  HOW IS ANY OF THIS ACTUALLY HAPPENING!? 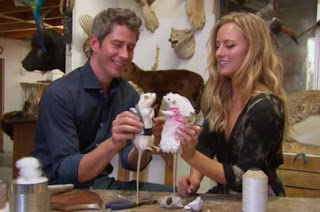 Kendall tells Arie that he'll be meeting her parents, her brother Colton (of COURSE kid's name is Colton) and her twin sister Kiley who "reads really heavily on energy." Away we go!

They all sip wine over a kitchen island that has been decorated to resemble a table and before you can say, "is a kitchen island really that much better on camera than a real table," Kendall and her mother have zipped off to their family walk-in jewelry closet (HUH?) to "DISH" (in the words of Kendall's lovely mama).  Meanwhile, Kiley rocks a pink, silk robe and 1997-style Steve Madden slides (DID ANYONE ELSE NOTICE THOSE?), plus giant hoops and seems unimpressed by Arie.  Kendall and Kiley have a sister chat among the beads and all that matters is that BOTH gals rock a mean liquid liner cat eye. Energy reader Kiley says that this relationship isn't "undeniable" at the same time that Kendall's dad tells Arie that Kendall isn't likely to accept a proposal. Wheee! I LOVE THIS FAMILY. They say goodbye to the family and once Kendall and Arie are alone, she admits that she kisses him in order to avoid "emotion" (or is it in order to avoid SEEING his FACE?) but Arie does that, too, so they're either a perfect match or a couple who will kiss their way through divorce court someday.

Up next is Tia's hometown of Weiner, Arkansas and you know I'm pro-Razorback because I have lots of relatives in Arkansas, plus I have visited many times.  The Arkansas accent is my favorite version of the southern accent and sweet Tia has got it.

Arie and Tia meet up at a dirt road race track because Bachelor Producers are desperate to remind Bachelor Nation that Arie was allegedly, at one point, somewhat cool.  They cruise around and both say "you did so good" which made Bachelor Nation's small neighborhood, Grammar Gulch, retch into a bag.  Over drinks in the bed of a truck (my kind of date), Tia tells Arie that he'll be meeting her parents, brother, aunt, and cousin.

Soon they are at Tia's parents' one floor house (so many one floor houses this year!) and Arie has flowers and a gift of the family. Sweet Tia breaks out in tears upon seeing her mother, which tugged at my heartstrings.  Once they are settled over a plate of pigs in a blanket (no joke), Tia tells a heartwarming tale of this one time when someone ELSE got the rose THEN Tia got the rose. Ahhh, love among the harem. Tia's Dad Kenny proposes a toast to Tia and "Air-ey" before he and brother Jason take Arie out back to sit in front of the "COOK SHACK" (is that just a sorta BBQ building? Like a pool house but only for meats?) to "grill him" (PUN INTENDEEEEEY!) about his reputation as a slut--err--the "Kissing Bandit."  Arie charms them each by saying that he USED to be a slut--err--Kissing Bandit--when he was you and, I dunno, maybe handsome???? (But like, probably not handsome EVER, let's be honest) BUT that NOW he's ready to settle down and Tia is strong, honest, and cool.  Both men LOVE HIM after that!  Welp, that was easy!

Meanwhile, Tia and her mother talk about how you need to learn some lessons in life and "if those hadn't gone so wrong, then this wouldn't be going so right" and I hope they form a country music duo with writing like that.  Once AREY and Tia are alone outside, she tells Arie that she's in love with him, drops an F bomb, and sends him on his way. Oh Tia, you are MUCH too cool for this jag.

Next stop is Minneapolis, Minnesota where Arie meets up with Becca "LET'S DO THE DAMN THING! I LIKE EXCLAIMING THINGS! DOESN'T IT MAKE ME SEE LIKE A FREE SPIRIT?" K. in a frozen apple orchard!! They talk about Becca's late father, pick apples and whip them into a target via slingshot, carve "B+A" into a tree stump, then head out to Prior Lake to meet Becca's family.

Becca's family is made up of mostly elderly men, one of whom is Uncle Garry who DON'T TAKE NO MESS, Arie.  Uncle Garry talks about Becca's late father and says that he and his crew are Becca's guard dogs and asks if Becca is the "real deal" to him. Arie responds that yes, she is, which is essentially what he tells EVERY FAMILY during his 4 stop hometown tour.

We watch the standard hometown situation--family is skeptical at first but Arie manages to SOMEHOW, SOME WAY, despite his lack of charisma and looks, charm them, then drive off into the night. Before he leaves, Becca exclaims, "SEE YA SOON, YA STUD MUFFIN" and good Lord it's like watching an awkward 5th grader try to learn how to flirt.  Please stop.

Arie's final stop on the tour is Virginia Beach, VA where Lauren greets Arie on the boardwalk with the required, fun, jump, straddle maneuver.  Lauren looks cute, which is smart since that's most of what she has to offer, and Arie's choice of a light blue button-down was VERY UNWISE cause (a) it's an unflattering color on him (but, well, what color IS NOT unflattering on him?), but larger issue (b) it shows pit stains!! And you are about to PIT HARD, Pasty Snooze!

At Lauren's family's beautiful brick home (is that design what they call Georgian? What do I know?), Lauren's mom is as poker face as Lauren and Lauren's dad seems to hate any male who doesn't play golf or have a military background. Wheeeee!! Sadly, Arie is AGAIN able to charm them (well, the dad at least) by mentioning that he went to Iraq to hang out with soldiers one time.  Lauren and Arie both insist that their connection is from the fact that they are SO similar and it's true--they are both EXCEEDINGLY dull! A match made in SNOOZE HEAVEN!  They kiss goodbye and soon it's time to hear back to Los Angeles for a good, old fashioned TV dumping!

The ladies are done up--Becca in a light red, one shoulder dress and delicate gold jewelry (love it), Kendall in a royal blue dress that's got a major V cut out by the boobs (love it), Tia in a white dress that feels like a tribute to the Winter Olympics (don't love it, but she looks great), Lauren in a black dress with sheer panels (love it).  Arie arrives in a dark suit, grey tie, and confused look on his face.  This fucking guy.

The ladies line up and before Arie commences with rose distribution, he pulls Kendall aside and at that point, I am SURE that he's going to send her home. That is THE MOVE, man. Be like, "can I talk to you?" then DROP KICK THEM but in a nice way where you don't make them watch a rose ceremony.  BUT NO.  Kendall talks to him about how she is feeling, that she wants to keep seeing him, but she has some walls up.  Then they got BACK to the line-up! Wah!??!!? Duuuuude.

OK, so roses get handed out like so:
-Becca - LET'S DO THE DAMN THING, AM I RIGHT??!??!?!? HAHAHHH I'M FUN!! RIGHT RIGHT?  AM I NOT A GIRL WHO SEEMS SORTA UNPREDICTABLE BUT NOT IN, LIKE, A TERRIFYING WAY?????
-Lauren - some still waters run deep, but some still waters are just profoundly boring, ya know?
-Kendall - Arie wants a lifetime of liquid liner and bead closets and, really, who can blame him?

So sweet, beautiful, cool as shit Tia is heading back to Arkansas to start posting Instagram stories about free junk she gets from fledgling personal care product companies.  She looks STUNNED and cries hard and I don't blame her.  They sit down on a bench and she asks what she did wrong, says she put herself out there, then she says THE BEST line I have heard in a while, "tell me SOMETHING."  Yeah girl.  I relate to that.  Shockingly, Arie says something that's also quite meaningful: "it's not about your worth--it's about the emotion between two people."  AMEN, PASTY SNOOZE.

Tia cries in the back o f the limo and in the preview for next week, we see that a disgruntled ex is about to drop in BUT FIRST, we have back to back BACH next week!  Sunday night will be Women Tell All and then Monday night is SEX EP aka Fantasy Suite. I'm fired up! Whose ex-BF do you think is dropping in? Lauren's? The dude has a southern accent, it seems--who could it be!? Also I can't WAIT for Women Tell All! KRYSTAL will be IN THE HOUSE!!
Posted by Selena Coppock at 9:42 AM