We are now living in Trump's America, a land where the Environmental Protection Agency had better SHUT ITS MOUTH because Donny said so, but, mercifully, we have Nick and the Gals to keep our spirits high as we slowly march toward a world of "alternative facts" where Press Secretary's carry personal vendettas against Dippin' Dots!

But you know what is NOT an alternative fact? How much all the ladies HATE CORINNE!!


Episode 4 opened with all of the women gathered by the pool looking gorgeous and having a Town Hall meeting about how much Corinne sucks.  Where was she? Upstairs dozing like Florida's own Sleeping Beauty.

Nick and Vanessa continued their intense conversation on the steps (during which she straight up offered to return her rose and walk, if he's just looking for someone to F around with--GO GIRL), and later Nick said goodbye to the ladies, assuring them that it's "all about the end game."

Post-pool party, Smiley Sarah and Therapist Taylor visited Corinne in her bed and calmly advised her to do herself a favor, pull it together, and stop acting like the rules don't apply to her.  Corinne cracked some pretty solid jokes, saying that she is NOT privileged (zing!), asking why they are so obsessed her (BOOM!), and insisting that that they need to get over it (HONK).

Soon it's rose ceremony time and every girl is saying she will be PISSED if Corinne gets a rose.  Nick and Chris Harrison have a quick chat about House Pariah Corinne as we watch clips of Corinne in the interview room saying that girls are "haters," they all have their "panties in a bunch" and they're "overly sensitive." Wait, is she employed by the Trump administration? Or do her talking points just flow so naturally from Donny's wig into her mouth?

Vanessa and Rachel already have roses, and does Danielle also?  Either way, the rose hand out goes....
-Raven - looking pretty good, but wait, is that greyish sorta textured dress made of window shades and--hold up--does it have separate arm pieces!??! To cover her biceps?  Huh?
-Taylor - blue, sleeveless dress, high ponytail, big hoops, solid look
-Whitney - lovely, lacey white dress and bold lip, but still, like, who is she?
-Kristina - From Russia With Love (is that Eastern Euro racist?) is looking hot in a red V neck dress
-Jasmine - maroon dress with long sleeves is super flattering and sexy, without being like, "tits out," ya know?
-Alexis - coral dress,  hoops, a bit too basic for me, but not bad
-Astrid - rocking a sorta Cher look (nice) with a white dress with blue pattern on it, but also, is she just another Whitney or am I experiencing hair/face blindness?
-Blonde Danielle - love the bold lip, cute sparkly blue-ish top thing
-Jaimie - woa woa woa straight hair now? How long did that take to blow out? I guess you got nothing better to do in the Bachelor Manse, so may as well while away your hours damaging your hair.
-Josephine - looking really great with the dark lip, thought that shirt color (dirty tomato) is atrocious
-Sarah Smiley - light dress, simple necklace, nice, light look
WOA IT'S DOWN TO BRITTANY, CHRISTINE, OR CORINNE!!!
-Corinne - in a red dress that looks like a weird bandage dress (remember when those were goddamn everywhere?) with hair down (of course--ugh--snooze).

So heading home we have Christine (the super sweet virgin who rocked cute hair scarves) and Brittany (who never did much, but did leave us with a LOT of weird side smirk in the style of McKayla Maroney. 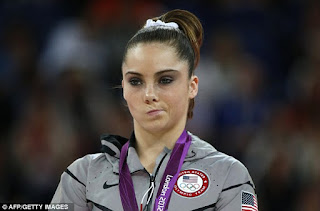 The girls who don't suck tearfully bid goodbye to Christine and Brittany then Corinne insists on proposing a LENGTHY, drawn out toast about how HAPPY she is to be here and how lucky they all are to be here and wow, I haven't seen petty, immature attempts at manipulation that bad since middle school.  Cool moves, girl!

So we're down to Nick and 15 girls and Chris Harrison has got some travel news. Pack your bags and your Lactaid because we are heading to WISCONSIN!!!! The ladies are THRILLED and I gotta say, I attended a wonderful wedding in Milwaukee this summer and it was a BLAST!  You'd be surprised how cool that down is--a lovely waterfront, some great bars, classic restaurants with awesome cheese options--solid stuff.  But poor Blonde Danielle is legit FROM THERE, so she's probably not TOO jazzed up, only because it's not an exciting, new place for her.  But I digress.

As the ladies unpack in their beautiful house (which has been scrubbed of any books, magazines, televisions, no doubt), Nick and his parents are crying and chatting in a local coffee shop.

The first 1:1 date in Waukesha, WI goes to Danielle L. (the artist formerly known as Tits McGee) and their date is a walk around Nick's hometown and a recitation of boring memories about him making out in the library, hooking up in fields, and having awful friends who encouraged him to jump in a river for $12 then BOUNCED.  They "happen to run into" an ex of his, Amber, who is super nice and gets along with Danielle really well--SEE THAT, AMERICA!??! NOT ALL WOMEN HATE EACH OTHER!!! (I'm stilled riled up from the Women's March and from being called an "aching vagina" by a random woman on Facebook--no joke! Life is a  magical journey filled with thrilling characters.)

That night in Milwaukee, Nick (looking like he's a JV Blood in a red leather jacket) and Danielle L. (in a black and white dress that she must have bought in Cleavage City, USA) drink and discuss Danielle's parents' divorce from a decade prior ("HI MOM AND DAD! Hope this isn't weird for you guys to watch on TV!" -Danielle).  I was LOVING Danielle's messy ponytail and sparkly hair tie, so I missed much of the conversation, but I'm sure the gist was that she WANTS to love, yet she's SCARED of love. Should I just watch the series on mute from now on?

Then they walk down the street and burst into the Pabst Theater (God bless Milwaukee and its amazing beer history) where they are greeted by HUNDREDS of screaming women (the energy was set to "Last Season of Oprah" levels). Nick and Danielle give high 5s down the aisle, then dance and make out on a platform in front of a "country" singer named Chris Lane. OK, I am a FAN of shitty Top 40 Country. I remember when Emily Maynard and that polish dude from Chicago danced to Luke Bryan on The Bachelorette before ANY "coastal elite lib-tards" knew who he was, but I was already into him. So if you're a new guy on the country scene and I'm like "duuuuhhhh wah?" then you'd better get your publicist working overtime.  Danielle has a rose and is safe for another week.

The date is on a dairy farm (what what WISCONSIN!) where the ladies will be bailing hay, milking cows, and shoveling shit (literally).  This date was MADE for Corinne and she had a tantrum, as the prophecy foretold.  While everyone else went along with it and made the best, had fun, Corinne said that her hands were SUPER cold, so she had to go sit outside and she was "almost hospitalized."  She whines that her private slave--I'm sorry, nanny--Raquel, should be handling her chores and says she wants sushi.

That night at the afterparty, the ladies walk up like a bunch of T Birds (practically EVERY single gal had a black leather jacket) and Nick quickly pulls Kristin aside.  My pal Lauren's favorite moment was when Kristin says to Nick that she'd like to tell him about her childhood and she may have to do that in pieces. Nick says yes, he'd like to learn about her childhood, but first it's MAKE OUT TIME. Corinne compares herself to a corn husk, which would be more appropriate if the gang was in Iowa or Illinois. How about a more appropriate comparison--perhaps a cheese that is both ugly AND smelly?

The ladies argue with Corinne as Vanessa shows Nick a scrapbook that her students made her.  Corinne begins to unravel, giving overly emotional apologies for napping (girl, you know it's not about you being tired--it's about being rude to the other girls--don't play dumb) then inviting the women to speak directly to her if they have an issue with her. Vanessa, Taylor, and Sarah take her up on that offer, which enrages her even more.  My favorite was watching Kristina drop some TRUTH on Corinne--that eastern european accent does NOT pull any punches and I love it.

Kristina says to Corinne that she's chooses to hide away and run away, rather than face things head on and show up for a 20 minute rose ceremony.  Corinne storms off to find Nick and pretend that everything is going great. I'm betting we only have one or two more episodes out of this girl (betting/praying).

Up next is a 1:1 for my favorite Razorback Raven and she's looking cute and casual.  Nick and Raven walk to a soccer field where they will be watching Bella (Nick's little sister, a recurring character on the show) play soccer and meeting Nick's parents!  Raven is a good pick for this date and she makes a solid impression.  Then they go roller skating and Raven is a good sport, plus very sweet to Bella.  That night Nick and Raven eat dinner in the Milwaukee Art Museum and Raven gives the blow-by-blow of her explosive last relationship, which ended when she kicked in a bedroom door and found her ex straddling another woman.  Yikes!  She beat him with a stiletto and now I am Team Raven for life!!

The next night is the cocktail party/rose ceremony somewhere VERY COLD with lots of candles and open flames.  Tensions are mounting and the dueling sides seem to be Josephine and Corinne vs. Taylor and Every Else.  Josephine, didn't you see how this ended for Lacey?  Everyone who befriends her gets sent home--save yourself!

Corinne and Taylor take a page from the Real Housewives and go sit by a fire to have an argument. Taylor says that Corinne lacks self-awareness and emotional maturity and Corinne responds that Taylor is "stuck up" which is an insult beloved by middle school idiots.

In the previews of next week's episode we hear that Corinne wants to punch Taylor in the face (real classy, multi-million dollar business "owner") and I'm betting money that those two end up on the 2-on-1 date (that's ALWAYS how they do it!) which will involve Everglades and Alligators, it seems. Will they be taking Corinne back to her homeland and leaving her there? We can only hope!
Posted by Selena Coppock at 9:42 AM