Hello, lovely readers!! Welcome back to another season of The Bachelor during which I will be often live-tweeting the action (@SelenaCoppock), talking smack with my pal Dava Krause on our podcast The Fantasty Suite and, as you must know because you are here, writing brilliant recaps here on my blog.  It’s the most wonderful time of the year!  My life has meaning again!  2017 won’t be a living nightmare—Nick Viall and the gals will save us!

ABC served up 2 heaping plates of Bach on Sunday and Monday nights.  Sunday night we had the “Countdown to Nick” special, in which we saw Nick run topless along Lake Michigan, we met a few of the ladies, we heard good luck messages from Bach alums such as Armpit Tats (Josh aka Andi’s ex and the video was filmed at an angle to quite literally showcase his armpit tattoos), we got updates on Bachelor couples, and Chris Harrison said that this season would be “the most controversial in the history of EVER” and I DIED. I sorta LOVE that the show is embracing their overused (but beloved) phrases.

Then last night we got into the action—Nick reflected on his previous heartbreaks, Nick’s family gave him advice, and we got a TAINT SHOT as Nick hopped into the shower post-jog.  Oh, and the ladies arrived and there were a WHOLE LOTTA LADIES IN RED!

Nick met up with former Bachelors Ben Higgins, Sean Lowe, and Chris Soules to get some pre-show advice (pro tip: don’t take any advice from Chris because he proposed to a corny girl who he didn’t even like that much). Ben gave a RUDY-inspired speech to get Nick fired up while Chris Soules smiled and burned my retinas with teeth as white as Donald Trump’s voting bloc.

Finally, it was time for Nick to suit up (he looked SHARP, I must admit) and head back to a place where he has spent a whole lotta time: The Bachelor Mansion.

We got some hometown previews from a handful of ladies: Rachel does civil litigation which is the type of law my father practiced, so I love her; Danielle owns 3 nail salons and has amazing hair; Josephine is a lil too kooky for my taste; Raven owns a boutique that sells horrifying peasant-style blouses but I like her because she’s from Arkansas, like much of my family; Alexis LOVES dolphins (holy foreshadowing, Batman); and Elizabeth hooked up with Nick at Jade and Tanner’s wedding. WHAAAT? Yeah. More on that later.

Let’s get to the arrivals!  Producers hosed down the Bachelor manse driveway (standard) and the limos rolled in.  We met….

-Danielle L. (the small biz owner) with tits out! Her low-cut, black dress was HOT and Nick certainly noticed.
-Elizabeth (marketing manater, Dallas TX) wore a white dress, blonde hair, nothing special.
-Rachel (Dallas attorney) rocked a sparkly red dress and made a joke about Bachelor fantasy teams—solid start.
-Christen (wedding videographer) made a bold choice with her yellow dress and yellow fan, and total rocked the look. She’s a LIL cheesy for me (BIG hair), but a cute girl with fun taste.
-Taylor (Seattle therapist, 23) wore a drab maroon dress that felt like Calvin Klein circa 1986 and immediately told Nick her friends hate him and think he’s a “complete piece of shit.” Cool intro, bro. Blech. NO THANK YOU!
-Kristina, 24, dental hygienist, royal blue dress, brunette. We learned in the Sunday episode that she was adopted out of an orphanage in Russia, so expect that tear jerker of a life story to come out and win her a rose in a few weeks’ time.
-Angela, 26, model, South Carolina (oh yeah, the booming modeling mecca of South Carolina) in a red dress with Ice Capades-style cut outs. Not my favorite.
-Lauren, 30, “law school grad” (ummm wanna take the bar, kiddo?), whose style I must say I LOVED: blonde hair, sparkly, champagne-colored dress. Yes yes yes! Too bad her opening joke (“Your last name sucks and so does mine!”) was super misguided and fell flat.
-Michelle, 24, food truck owner, joke about lemons into lemonade, not much there.
-Dominique, 25, coral dress, perfect curls—looking great, friendly intro, well played.
-Ida Marie, 23, lacey blue dress with WHITE SHOES (no no no no no) who you may remember from the questionnaires (released a few weeks back) as the girl who doesn’t have a favorite author OR a favorite book because she doesn’t read. Yikes.
-Olivia, 25, Alaska native so she teaches Nick an Eskimo kiss and wears a fur—perfect intro!
-Sarah, 26, very smiley, literally RUNS toward Nick and jokes that she thought he’d appreciate “another runner up”—very sweet.
-Jasmine G, 29, pro basketball dancer rocking a gorgeous turquoise dress. She brought Neil Lane with her in the limo—cute move, funny, memorable.
-Hailey, 23, was originally my pick to be the house nightmare and her opening joke lived up to that:
Hailey: “Do you know what a girl wearing underwear says?”
Nick: “I don’t”
Hailey: “Neither do I”
GET IT, NICK?? She’s GOING COMMANDO! Do you get it? Beneath that red dress (cliché AF), there are NO PANTIES!! Wowie wowie wowiw!! Are we in ninth grade?

Hailey kicked off a chunk of ladies who I found MUCH TOO SEXUAL for (1) primetime, network television; and (2) night 1 with a guy you hardly know! Have I become a complete prude in my later 30s? Did anyone else feel that way? It was just TOO MUCH too soon and MUCH too thirsty!!

But I digress. More arrivals:

-Astrid (26, plastic surgery office manager) rocking a fierce fuscia dress, long brown hair. She speaks German about her sex life and breasts—huh? We’re 45 minutes into the show. Am I an old school marm?
-Liz (26, Doula) looking beautiful in a sparkly, navy dress with brown hair curled and to one side (love) who we learn had sex with Nick after Jade and Tanner’s wedding. Again, yeeeeeow. Is it just me, or do you feel like the phrase “hooked up with” would have been used in years past? Am I a dweebus? Either way, she never gives Nick her name, they have a very strange interaction in which you can SEE Nick wracking his brain for her name. She walked away and Nick’s expression seemed to say “woa these producers have some tricks up their sleeves.”
-Corinne (24, “runs” her parents' company and claims to be a businesswoman, Miami) wearing a cute maroon dress, blonde hair curled. Gives Nick a hug token like some sort of currency manipulator.
-Vanessa (28, special ed teacher, Montreal) wearing a very flattering and very unique black dress with white stripes. She speaks French to him—very cute.
-Danielle M. (31, neo natal nurse) wears a dark red dress with hip cut outs (hard to pull off) and gives him maple syrup made by her father (well, her father and a tree) and makes Nick lick it off her shaking fingers. Gross. Don’t we all know what syrup tastes like? Was the finger lick really necessary?
-Raven (25, Arkansas native) wears a gorgeous, super sparkly dress that contrasts nicely against her dark hair. Like a good Arkansan, Raven enters with a “Pig Soooey” call (which we once did in my childhood backyard when my father hosted an Arkansas party). Very cute.
-Jaimi, 28, chef. One of the only girls to wear a cocktail-length dress, curly blonde hair. Makes a joke about Nick having balls and she has balls, meaning her nose ring. OK.
-Briana (28, surgical nurse), we don’t learn much.
-Susannah (26, account manager) wears a super chaste maroon dress, gives Nick a beard massage. Meh.
-Josephine (24, nursing student) who walks up with a book (that I initially mistook for a clutch and I was like, YES GIRL bring along some lipstick and powder for touch ups!) but NO, it’s a book with the pages cut out and inside she has placed a hot dog so that she can make the God awful pun “you’re a weiner in my book.” I hate everything about this. No no no.  I am legit ALLERGIC to puns, I find hot dogs pretty disgusting, and the thought of eating a raw one is abhorrent. Blech.
-Brittany (26, travel nurse) wears a red dress and seems to make a proctology joke. No thank you.
-Jasmine B. (25, flight attendant) also wears a red dress, is forgettable.
-Whitney (pilates instructor) wears a drapey red dress, who cares.
-Lacey (25, digital marketing manager) arrives on a camel and repeatedly makes a joke about HUMPS and HUMPING (OMG we get it, girl).
-Alexis (23, aspiring dolphin trainer, NJ) rolls up in a dolphin costume and drops a pun (boo), but I dig this girl because she’s silly and knows how to stick with a joke, plus she literally deadpans “thank God I didn’t wear a red dress, too” which is the best.

Finally it’s cocktail party time and we see the standard montage of Nick learning about each girl while other girls lurk in the shadows to “cut in.”  Corinne gives Nick a bag of hug tokens (please STOP with this lame gimmick, girl) and then later she jumps on him in order to land the first kiss (little does she know that Liz actually gave him the first kiss 9 months ago and it was the ‘ole kiss on the dick).  Jasmine G. has a lil meltdown, Alexis the Dolphin (it’s really a shark costume but I’ll indulge her) catches snacks in her mouth, goes swimming (no joke), then remarks that she wants to be the first dolphin to get a rose. 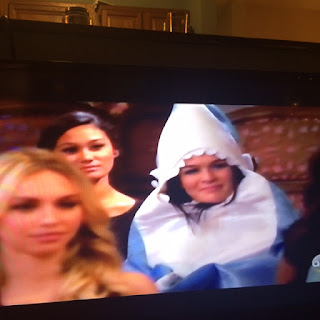 Nick and Liz have a chat on the front steps, before which Liz says the biggest, saddest lie of all time: “I’m kinda glad that he didn’t remember that we had sex—I like the mystery of it.” Sure ya do, girl. Oh man. This whole storyline makes me feel icky.

Thankfully, their awkward conversation is interrupted by Danielle (red dress with BAD cut outs) who shows Nick the worst gift of all time—a framed Carrie Bradshaw quote. Oh girl. No. Just no. Look, I’m a HUGE Sex and the City fan and I used to be a frigging tour guide on the Sex and the City Bus tour, but you don’t woo a dude with Carrie quotes.  You just don’t.  And I’m afraid that soon Danielle will be hearing a Miranda quote: he’s just not that into you.

Nick gives Rachel (TX lawyer, red dress) the first impression rose and watching Corrine process that disappointment was music to my eyes.  Before we know it, it’s rose ceremony time and the run down is:

So the crew who were rejected in favor of a dolphin are:
-Olivia the Alaska girl (too bad!)
-Angela who shared Carrie Bradshaw quote in frame (BAD MOVE)
-Susannah who gave him a beard massage (huh?)
-Lauren - blonde in sparkly dress who insulted Nick’s last name (bad joke, girl)
-Briana - nurse girl in sparkly dress
No big shockers there.

This looks like a good season with Corinne serving as the new Olivia/Courtney/girl who didn’t come here to make friends, Alexis the Dolphin Girl as Miss. Congeniality, Rachel serving as a major front runner, and Chris Harrison acting as our strong and steady tour guide through the raging rapids of love.

What did you think of episode 1? Sexier than in years past? Thirstier? Who are your favorites?