Last night I burned through two, 2 hour episode of The Bachelorette, which is more time looking at Andi's myriad dresses than the duration of Lord of the Rings (though a good Bach franchise nickname would be Lord of the Rings -- Neil Lane diamond rings!).  I'm going to try to keep this 2 episode recap from going on too long.  Let's dive in!

Sunday's episode has Andi and the Boyz in Santa Barbara (home to my namesake, Selena McKinley! Contrary to popular belief, I was NOT named after the Latina Sensation!) where they'll have 2 one-on-one dates and a group date.

Nick (formerly "Nick V.") scores a date and Andi slowly "makes him a believer" (as she says repeatedly), though Andrew doubts that Nick "believes in the process." It's rich to hear a forgettable sleaze like Andrew trump the virtues of this "process."  Nick and Andi ride bikes around Santa Barbara, hike, drink wine, and bask in the evening light known as the "magic hour." (I went on a date with a filmmaker recently--can you tell? I'm droppin' JARGON like I dropped his ass after a few dates! If he's reading this, I'm just being playful! I'm not evil, I swear!)  Over dinner, Nick reveals that he was engaged once and the failure of that relationship took him down a peg. He mentions his theory on love (that there isn't one star-crossed love of a lifetime for each person, but rather that you pick the person you want to be with and you work through inevitable challenges as a team) and suddenly I don't want to mock his short pants so much anymore. Dude scores a rose.

Up next is a group date and the dudes think that they are going to be singing karaoke (what is this, The Bachelorette: Japan Edition? HONK!) but instead, they get private singing lessons from Boys II Men (those Motownphilly royalties aint what they used to be, huh?) then perform in a live concert!  Opera Man Bradley thinks he's got this group date in the bag, but unfortunately laying on the vibrato while singing "I'll Make Love To You" is the opposite of sexy.  The guys absolutely butcher the song as Boys II Men look on and wince.  I wish they had done a rendition of a deeper cut from Boys II Men--maybe some "Water Runs Dry" or "On Bended Knee" for the lovers?

At the after party Andi rocks a gorgeous, 1 shoulder pink dress and has some sweet moments with the guys.  She teases Cody (Macklemore on Roids), tells Marcus that her favorite color is black, which makes him smile mischeviously (can we cut it with the racial allusions?), and has an awkward conversation with Eric during which he basically asks her if he's special and she says no (in so many words).  She chats with master manipulator (and proud owner of 2 under bicep tattoos) Josh and the BS that he spews somehow charms Andi--he scores a rose.  (Andi girl, you're creating a monster!)

Up next JJ (the Pantsapreneur) gets a 1:1 and their "fun activity" is sitting through hours of hair and make-up to be made into old people, then walking around a park!  Apparently elderly people LOVE super short pants.  I hope that the Pantsapreneur took note!  That night they revert back to being late 20 somethings who are way too eager to get married and talk over wine.  JJ finally gets on my good side by sharing that he was bullied as a kid (stories of childhood sadness put you on the fast track to my heart) and calls himself a "quirky individual." Aww JJ, your self awareness is really endearing.  He wins a rose.

Oh, in the midst of all that, Ron (handsome dude, flying under the radar) gets a phone call that a good friend died and he leaves immediately.  Sorry, buddy, but props to you for jetting and not dragging out the exit.

Finally it's rose ceremony time Andi is looking amazing, as ever.  Andi and Eric are chatting alone when flowers from Nick are delivered to her ("I got cockblocked by a bouquet of flowers!" -Eric).  JJ and Josh confront Andrew about how he got the phone number off a restaurant hostess a few days after filming started and Andrew runs away like a chickenshit.  When he emerges from his hiding place, Andrew is reading to play the victim, calling JJ and Josh "low lifes"(sorry, low lives? What am I supposed to do with that?) and saying that he was simply handed her digits without asking (life is so hard when you're ridiculously good looking--or even when you're average looking, like Andrew).  Bachelor Nation, we have this season's villain, Andrew, and he didn't come here to make friends!

Line 'em up and knock 'em down cause it's rose ceremony time!  Nick, Josh, and JJ are safe.  What's the run down?
-Marcus (dude revealed some SICK abs this episode)
-Brian (basketball coach is authentic and sweet)
-Marquel (he's hilarious and dresses well)
-Tasos (sweet guy, but I don't see Andi connecting with him that well)
-Cody (Macklemore on Roids lives to see another week!)
-Patrick (slicked hair might want to develop a personality one of these days)
-Chris (Iowa farmer gets hotter by the episode--I don't care if he has a personality or not)
-Eric the Explorer (who strikes me as a bit naive)
-Dylan (Boston sweetie showed off a cute cross necklace this episode! Take me on a date to Kelly's Roast Beef, you Masshole Magic Man!)
-Andrew (you gotta keep the villain around to stir it up!)

So Brett the hairdresser (aka Poor Man's Jason Burke) and Bradley (Opera Man) are getting the boot.

Hold up, WE AINT DONE YET!  Chug some gatorade because we still have 2 more hours of BACH!

Now we're down to 13 dudes and 1 lucky Andi. They head east to Connecticut (specifically, the favorite touring stop of C list bands and reunion tours, the Mohegan Sun Casino) and Dylan gets the first 1:1.  Dylan and Andi board a steam train and finally get some private time as they travel along the Connecticut River.  Am I the only one who had flashbacks to Good Will Hunting (when Will sits in the window of the Red Line above ground) as we watched Dylan's unemotional countenance sit in front of the train window? 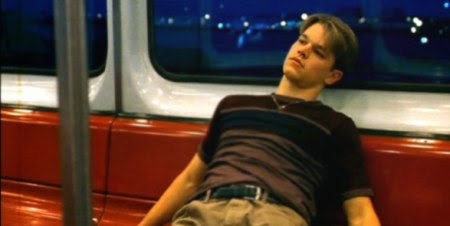 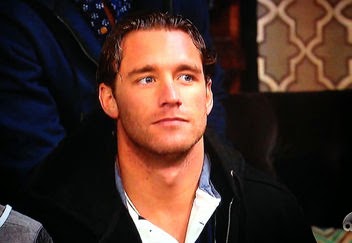 Oh Boston, how I love you and all your people.  Over dinner that night, Dylan reveals that his sister and brother both died from drugs within the past 4 years and speaks about it candidly. Andi is thrilled that Dylan finally opened up and gives him a rose while insisting it's not a pity rose.  I think it's not--it's a "dude you are HOT and you hail from the greatest state in the union" rose.


Up next is a basketball group date and Andi is rocking some cute high heeled sneakers (this trend is finally growing on me.  Sorry for ragging on it for so long, Laurel).  The guys play against WNBA players who cream them without even trying (hell yeah!), then play some five-on-five among themselves to have a better skills match.  Brian's basketball coaching skills pay off, as the Rosebuds win handily.  The 5 Hearts are sent home right after the game.  Sorry, Josh, Tasos, Chris, Patrick, and JJ.  Go get on the away game bus back to your room.  That night, Andi wears a rocker chic leather dress and chats with the guys.  Brian takes her back to the court and make a basket from center court, then doesn't lean in for a kiss (get a clue, kid!) and Eric continues to kvetch that it's too formal and he doesn't feel special anymore (and slowly reveal that perhaps his constant adventure travel is overcompensation for a lack of personality? Just a theory.)  Despite the fact that he has ZERO game, Brian gets a rose.

Marcus and Andi have a one-on-one date and by this point in the night, I was holding onto my sanity by a thread but those two crazy lovebirds were holding on tight because they were rappelling down the side of the Mohegan Sun Hotel & Casino!  What will these producers think of next?  Apparently nothing, since rappelling comes up every damn season!  They make it to the bottom (thanks to Marcus's paternalistic cries of "trust yourself" and "don't look down") then have dinner at an old inn where Marcus talks about the abrupt break up of his last relationship.  He gets a rose and they wander into a country concert where John Pardi croons while they dance and smooch on an elevated platform.  (If I were John Pardi, my go-to line would be "PARTY is my last name! Well, it's actually a homophone, but seriously I love to party!")

Finally it's cocktail party time and we're in the home stretch of this Bach night that is longer than The Wolf of Wall Street (minus the Quaaludes).  Andi's in a killer gold dress and the guys get to work, with Tasos pulling her aside, Brian finally getting the courage to kiss her, and Marquel cracking jokes.  Eric seeks alone time with Andi and says that he thinks they are "stalled" because SHE is holding back and not revealing herself (great work on the psychological projection, guy! Freud would be so proud!). He says that she is being a TV actress with a poker face, which prompts some pretty expressive faces from Andi as she rips into him then sends him home. It really seemed like he was needling her and only when she was upset did he claim that he was seeing "the real" Andi.  Dudes: If there is one thing that you can learn from that scene it is that you should NEVER claim to know a woman better than she knows herself. It's super manipulative, crummy, and insulting. Eric hops in a cab.

We don't get a rose ceremony after that scene, as I'm sure that Andi and the producers didn't want to have any further negativity in Eric's final episode.  I can't imagine how exhausting it must be to be at the center of the franchise and while Andi got pretty upset and angry at Eric, I think her reasoning was valid.  Overall, he seemed pretty obtuse.

So Tasos left without ceremony (rose or otherwise) and it wasn't a shocker--he and Andi never seemed to have much in common.  In the coming weeks we'll see Andi trim the fat (I'm looking at you, Patrick, Marquel, and Macklemore on Roids) and hone in on serious contenders.  Because ABC likes to keep us on our toes, next week there will be NO BACH (try to make it through by rolling around on a bed filled with print outs of my past Bach recaps) but we'll be back in 2 weeks with some international travel and, no doubt, footage of dudes in swimsuits.

Talk to you then, Bachelor Nation! #TeamDylan