Monday night was Bachelor Nation's most beloved, bitchy, petty episode of every Bachelor/Bachelorette season, THE MEN TELL ALL.  And TELL THEY DID!! (JK it was actually a pretty standard Men Tell All which is to say, everyone looked the BEST they have ever looked, some shade was thrown, and a dozen dudes had their final moment of TV fame).

I missed the first 30 minutes because I was en route back from a long weekend spent upstate with friends on a writer's retreat.  A writer's retreat is a fun way of going upstate of drink, eat, and be lazy, then crank out some brainstorms for writing projects during your last 2 hours at the house. That's precisely what I did!

So I missed the first 30 minutes but my roommate Lola informed me that during said half hour, Jean Blanc (the dude who was a professional "perfumer" and "big watch wearer" or something) openly mocked the former professional football player, Colton, and the fact that Colton is still a virgin. Cool move, dude who seems to have made a job out of "smelling good" and "being metrosexual."

Apparently Connor was in the house making good comments and wearing glasses, which I can only imagine was HOT LIKE FIRE. As they kids say re: sex, Connor can get it. (Too crass?)

I joined in once we were having a few guys get in the "hot seat" as Chris Harrison INSISTS on calling it, despite the fact that it gives all of us in Bachelor Nation major dumb chills.

We heard from Florida-based male model Jordan, who remains unable to talk about anything other than himself, yet is somehow almost charming? His mortal enemy, David, was rolling his eyes and, hey man, I'm just glad David still has the ability to ROLL his eyes after the face plant that he took off the top bunk.  Leo was there with his hair FLOWING down, but there was no sign of his man bun sidekick (aka The Other Manbun).  Wills rocked a killer plaid suit and red boots, in classic Will fashion (LITERAL FASHION, GET IT?) and during his time in the "hot seat" (barf) was very emotional and candid.  Do you see Wills as a possible Bachelor?

Colton got in the hot seat (oh God someone get me a new barf bag because this one is FULL UP) and was VERY emotional about the shame he carries about being a virgin and how troublesome that is, especially within the pro sports community (I can only imagine, you hot BOI). I think that Producers might want Colton to be the next Bachelor because I can totally see that ad campaign:

Colton is The Bachelor.

AND IT WILL BE THE FIRST TIME!! Fantasy Suite virginity loss, baby!

But I think that Jason is giving Colton a run for his money, as far as campaigns to be the next Bachelor.  Jason looked fantastic, came off as SUPER self-aware, was absolutely gracious in processing his rejection and heartbreak, and even gave Becca a big hug when she came out. I think he would be a GREAT Bachelor and not JUST because he's old college buddies with the golden retriever of the Patriots, GRONK. 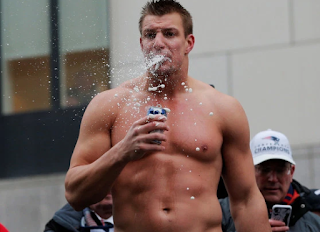 So yes yes, Becca came out and looked like a smoke show—dark, lacy, clingy dress, sparkly hoop earrings, hair curled perfectly and set off to one side, excellent tan—perfection.  She spoke to all of the guys and was super generous of spirit to Jordan, Jean Blanc, everyone.  Chris (creeper from FL with bad facial hair, a BAD attitude) very wisely apologized profusely to Becca and he must have watched the season with a self-aware woman who explained it all to him, because he spoke the vocabulary of "getting it"—he admitted that he was entitled, he didn't listen to her, he was too pushy, he was selfish.  Yeah you were.  OK bye now.

Overall, a pretty standard Men Tell All and the only surprises will likely be the casting of the next Bachelor.  But before that, we have some Bachelor in Paradise to witness (starting 8/7). But before THAT, we still have a season finale of THIS Bachelorette season to enjoy!

I'll be hosting a Bachelorette finale watch party at QED (wonderful theater in Astoria) on Monday 8/6.  More information here.  Come on out!  We will NOT be talking during the show but I'll be doing some color commentary during commercial breaks.  Come on out!
Posted by Selena Coppock at 1:22 PM