On Monday night, Bachelor Nation slogged through 3 hours of Bach and barely made it out alive. There were tears, bold lipstick choices, and at least one orgasm.

We left off last week with Raven and Nick heading into the Fuck Hut--I mean, Fantasy Suite--where they could hump down while watching the Northern Lights. Finland really DOES have it all!  This episode kicked off the next morning, with Raven saying that "Nick is really good at what he does" (software sales? being a repeated romantic reject? licking genitals?) so "I'm pretty satisfied today," then she proceeded to skip around Lapland, giving high fives to passers by and making snow angels to celebrate her orgasm.  Hey, to each her own.  This reminded me of a hilarious scene from 500 Days of Summer:


Up next is Rachel and she is looking cute in snowbird style--red flannel shirt, red hat, jacket, boots. She runs to Nick and gives him a big hug and straddle (the only way I will greet ANYONE from here on out), then they go cross country skiing (the worst "sport" in the world), feed reindeer, and cruise on a sled. As they sit by a fire and drink tea (or hot booze?) Rachel explains that she struggles with being open to this experience and her fear of rejection, and assures Nick that he's a rarity--a genuine good guy (or something) to which Nick jokes that "I may be white, but I'm still a minority" which cracked me up but seemed to piss off some people on Twitter.

That night Rachel rocks a belly top, winter weather be damned (girl after my own heart), plus a striped sweater and black pants. She and Nick have a great conversation about following your heart and letting yourself fall in love, which prompts Rachel to tell him that she's falling in love with him. Nick responds, "I'm falling for you 100%" which is weird to hear when you KNOW THAT HE SENDS HER HOME IN MERE DAYS.  They make out HARD then open the Fantasy Suite card in which Chris Harrison implores them to explore each other sexually and offers them an old school skeleton key.  They head upstairs (so skeleton key was just a prop?), hop on a bed, and, presumably, have a night of sweet, sweet lovemaking.

The next morning Rachel is ALL IN and feels very confident while looking cute as a button in her sleeper suit (or were those pajamas? same thing?).  Nick has gotta jet and body check another lady, so he says goodbye.

We see Vanessa roaming the woods in a Canada Goose jacket (so much controversy about those jackets lately!), boots, and a hat thinking about how her hometown date "didn't go as well as hoped" (that's a nice way to put it) and that it left her with questions ("can anyone ever handle my HUGE, very loud, very intense family?").  Nick found their hometown date to be "a little on the serious side" which is another great way of admitting that this isn't fun anymore and perhaps his relationship with Vanessa has run its course.  They dress up in American Gladiator style blue swimsuits and spend their date submerging themselves in a frigid ice bath outdoors (WHY?) then running back into the hut to flail around. I thought that how that type of thing worked was that you immerse yourself in cold water, then hot water, then cold water, and so on--am I wrong? When did it become: scamper to an ice bath and shriek then sprint back into a hut and curl up in a ball on a wooden bench? Is this a new thing?  Finally they end up together in the hot tub (where they SHOULD have spent the entire damn date) where they discuss family. Nick says hers is very "traditional" and has many "big personalities" but claims to like that or maybe no? I literally couldn't understand what his point was, while Vanessa admits that she has CORE VALUES that she won't compromise on (what those specific values ARE, I couldn't tell, beyond weekly Sunday lunch with her family) YET she also thinks that Nick needs to learn how to compromise.  Huh?  Yikes!  Any way you slice it, this didn't go well.

The "If We Were In the Real World We Would Just Stop Hanging Out at This Point" tour continues that evening over drinks by a fire, where Nick essentially sings the Star Spangled Banner to Canadienne Vanessa. I'm sorry, but if you can't even begin to have the conversation of where you might live, I don't think you're going to make it.  Nick wonders if they are perhaps too similar, which doesn't seem like the real issue here, but probably a good smoke screen for "I'm just not that into you."  Vanessa says that Nick makes her feel like "the only person in the world who exists" which is a strange thing to say to ANOTHER person, but whatever. Generally, their interaction feels like a contract negotiation and I can't tell if that bodes well for Raven ultimately, or if the producers are tricking us into seeing Vanessa and Nick as a nonstarter.


They rip open the card from Chris Harrison encouraging them to test drive it before they buy it, head out to the Fantasy Suite, and get to business.  The next morning we see shots of them cuddling and Vanessa says "I love you" in a way that is VERY natural, considering that they each member of this couple probably refuses to move cities for the other.

Soon it's rose ceremony time and the ladies are ready and dressed in black.  Rachel's dress has a dramatic, beaded neckline and back straps; Vanessa is in a mermaid cut dress (my fave) and looks gorgeous, Raven wears a black cocktail dress with a keyhole cleavage cut-out and it shows a LOTTA boob.  Wow.

Nick arrives and gives a semi-weepy monologue then hands roses to Raven, then Vanessa.  So sweet Rachel is going home, as we expected to happen WEEKS ago.

Rachel and Nick both cry and have some great hugs and conversation about what happened and it's actually not THAT hard to watch, since we know she has better things coming her way next season.  To be completely honest and corny, seeing her crying as she left and then seeing her in Women Tell All looking gorgeous and gearing up for HER season gave me a lot of hope.  I may be trying to get over a certain guy right now and pained by thoughts of him, but in a few months I'll be in my own metaphorical one shoulder dress feeling confident, looking great, and having a studio audience applaud me.

The Women Tell All was a 2 hour episode that really could have been a little over 30 minutes, if I had my druthers.  We watched Chris and Nick "surprise" Bachelor viewing parties all over southern California then headed back into the studio to see 19 rejects one last time.  Who was there?

-Jaimie - cute pink dress but later in the show her cleavage was background when Kristina was talking and it was a lil awkward.
-Liz - aka The Girl Who Humped Nick Pre-Show, But Also Digs Wells for Poors. I loved her red dress and red lip--great look, even if her strange pro-sex speech was pretty corny.
-Elizabeth - LITERALLY WHO?? She's very pretty (maybe overdid it a lil bit on the under-eye concealer, though) and I LOVE her bold, fuscia lip but everything she said just made me feel like I was listening to The Who's hit song "WHO ARE YOU"???
-Josephine - I had forgotten what a sorta sad wanna-be sidekick she was to Corinne, but she reminded Bachelor Nation. I LOVE the dark lip trend, but when you combine black lips and white-ish hair AND a mustard colored crushed velvet dress, you are playing with FIRE. No thank you. 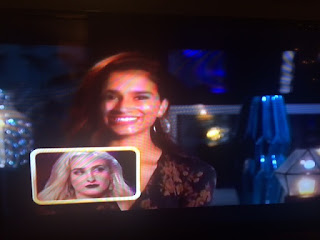 -Lacey - NYC gal who didn't leave much of an impression, but seemed to want to do SOMETHING in this episode. Now her hair is light brown, which was meh. Also her dress was a snooze and a half in an unflattering color.  I'm sorry.
-Christen - LOVED that red dress with cool neckline, her question to Nick was sweet.
-Alexis - Dolphin Girl bein' Dolphin Girl with NJ state issued hoops and a plain black top.
-Dominique - sparkly top--I like it, but also she seems confused as to how love works. You like what you like, ya know?
-Astrid - in a cute fuscia dress but her hair/personality made me take a quick nap.
-Hailey - white separates, looking good, chiming in a LOT, whatever.
-Taylor - STILL has yet to figure out how to pull together a flattering look for herself.  During the episode Taylor begged Corinne to apologize for, essentially, making her look bad/unprofessional, but I'm sorry girl--you did that to yourself.  Her montage was PAINFUL to watch--wow.
-Sarah Smiley - cute, patterned romper thing with lace up neckline. Super cute.
-Jasmine G. - loved that bold pink dress, eye make-up was a lil heavy.
-Danielle L. - black patterned dress wasn't the most flattering and she seemed STILL UPSET over Nick. Wow. May I recommend "Start Where You Are" by Pema Chodron? For real.
-Corinne - holy clip in hair extensions, Batman! She looks good and during her time in the hot seat, she actually came off really well then handed out cheesy pasta. Way to stick the landing, girl.
-Whitney - aka Astrid in a black dress. Chimed in with some gems a few times.
-Danielle M. - she has gone from a golden blonde to an ashy blonde and I LIKE it. She wore a bold, white romper thing with low cut chest and I admire her strong choice in outfit.
-Kristina - looking beautiful in a red dress with high neck.

They joke around, discuss whether Corinne was the unfriendly know-it-all in the house or Taylor was (my money is on Taylor), and Liz strategically tries to make her one night stand with Nick pre-season into a feminist issue of slut shaming (which it wasn't--I think some girls were weirded out by that situation only because it seemed to give Liz a leg up--pun intended--from the start).  They form a pro-napping political party, there is SO MUCH EYE ROLLING, they all agree that they were all hyperventilating and having anxiety attacks ALL the time in the house (mmmK--I have a feeling none of you know what those things are), and Kristina helps make everyone else seem petty by talking about orphan life as a stepping stone to possible sexual slavery.

Nick comes out and sort of apologizes to a few of the women for simply not having chemistry with them (that's always the weirdest part to me) then Rachel comes out and talks about her excitement about being the first black bachelorette in franchise history.  She put it so well--she doesn't want that fact to be the FOCUS of her season, but she does want to acknowledge it.  Perfect.  I cannot WAIT for her season.

But first, we gotta see who wins Nick's heart for the next 6-8 weeks: Raven (fun, young, American) or Vanessa (seemingly not quite as fun anymore, adult, established, Canadian).  If history serves, Nick will pick fun over adult and besides, it's probably easier for Nick to break up with Raven during Dancing With the Stars than it would be to dump Vanessa.  Am I being too cynical?  Stay tuned!

Also, listen to the latest episode of The Fantasy Suite where Dava Krause and I dish on this episode and last.  All that here (ep 8): https://soundcloud.com/thefantasysuite
Posted by Selena Coppock at 12:22 PM