My recap is INSANELY late, I know.  And I'm dropping late recap on the most dramatic episode of the season--are you kidding me!? And I call myself a Bach die-hard!!

I finally had time to watch Monday's episode and lordy lordy it was a goodie!  We had bikinis, unflattering photos, and a roll away bed.  What more can you ask for!?

The 6 remaining women and Sean flew to St. Croix for some fun in the sun and bonding time before "hometowns" (how sad is it that "hometowns" has become Bachelor jargon and we all know exactly what it means?  We all do, right? EVERYONE! Just me? SHUT IT!)  Tierra immediately sets up a room of her own (Virginia Woolf-style) because she doesn't want to share a bed with any of the other women (not very Virginia Woolf reasoning) and that "private room" is a friggin' roll away bed in a hallway.  Cool setup, Scar!

AshLee scores the first 1:1 date and Tierra makes a crack that AshLee is a cougar.  AshLee is 32 and Sean is 32, so nobody is a cougar here, Tierrible.  If you insist on animal metaphors, a more apt one might be that Sean and AshLee are jungle cats BORN ON THE SAME DAY, jerkwad.  Tierra then wonders why AshLee is still single at 32 and hasn't "found someone."  Oh Tierra, just when I think I can't hate you more than I already do, you drop a comment like that and further the harmful dialogue that women can ONLY matter in society if they are married or pregnant.  (Women's Studies 101, what what!)

AshLee and Sean spend their date swimming off a catamaran and she rocks a two tone bikini, which is a style I love and I wear on the beach at my own personal St. Croix, Coney Island.  Lovely AshLee levels with Sean about Tierra, sharing specifics about how unfriendly, fake, and childish she is.  Go gurl!

That evening they share dinner and AshLee admits that during her period of high school rebellion, she got married at 17 and divorced by 18.  (Look Mom & Dad: that makes my high school rebellion getting of a tattoo & shoplifting look like CHILD'S PLAY!)  They stand on chairs and scream about their love (holy dumb chills, Batman), then she drops the L bomb with Sean as they wade in the water and make out.  No rose up for grabs on that date, but Sean obviously adores her.

Meanwhile back at the lady lair, Tierra learns that she'll get next 1:1 date and the other women are SUPPORTIVE and friendly about it because they are classy as hell. The date card says something about exploring the town and Tierra immediately starts kvetching because she'd rather be on the beach or sailing with Sean.  Tierra IS Veruca Salt (the insufferable brat from Charlie and the Chocolate Factory--not the 90s band).

On their date, Tierra and Sean enjoy frozen drinks, stumble upon a parade (when DOESN'T that happen on dates, am I right single ladies?), and go shopping.  Sean buys Tierra a few trinkets and she is elated because Tierra's only type of emotional currency is ACTUAL CURRENCY.  Sean and Tierra sit and talk about "how she's doing in the house," which is Sean's tactful way of addressing the fact that she's this season's Vienna/Courtney.  Tierra is unrepentant, saying that she wouldn't have handled things in the house differently if she could do it over, which is probably NOT what Sean wanted to hear.  Tierra complains that Sean is being distant and blames the women for this (saying they sabotaged her), rather than accepting that maybe this dude just doesn't like her anymore.  Tierra is The Bachelor's Taylor Swift, constantly blaming others for her misfortune, when maybe she should do a lil self-reflection. In Sean's eyes, the bloom has simply fallen off the rose of Tierra, and it's gorgeous to watch.  (Is there a more appropriate place for "bloom off the rose" jokes than in a Bach recap? I'M A GENIUS!)

The next day is a group date for Sean and Catherine (half Asian, cool gal but a somewhat annoying voice), Desiree (poor man's Katie Holmes), and Lindsay (super bubbly runaway bride) and the date kicks off before sunrise when Sean storms their bedrooms and wakes them at 4:30 am with a flashlight and camera.  I assumed that they were going to be kidnapped and left somewhere off campus to find their own way home, sorority pledging-style, but alas they just drove to the beach to watch a breathtaking sunrise.  The foursome spent the whole day on a road trip across the island of St. Croix to the west side, where they watched the sun set and each girl had private time with Sean.  Catherine revealed a LOT about her father (depression, suicide attempts) and I'd bet that her dad's depression wasn't helped by his daughter spilling his beans on national TV. Lindsay went swimming but somehow ended up with a face FULL of make-up, and Desiree started crying at the mention of her parents.  It's getting emotional pre-hometowns, amigos!  There was a rose up for grabs on that group date and Lindsay got it, so Sean will be meeting her military father next week.  Gulp.

The final 1:1 date goes to rad razorback lady Lesley, who puts on a super cute, coral skirt and meets Sean in a park where they pick avocados, make out, and have awkward conversation.  Sadly, Sean says that his relationship with Lesley simply hasn't progressed the way that his other relationships have and it's a foreboding comment to me.  Maybe also because I already heard who got negged.

The next day, Sean's (rad, blonde) sister Shay arrives on St. Croix to give some sibling counseling.  Before Sean left for this adventure, Shay gave him ONE piece of advice: DO NOT end up with the girl who everybody hates.  BLESS YOU, SHAY!  If only former Bachelors Jake and Ben had sisters like you!  Sean tells Shay that Tierra is that girl and tries to defend her, finally deciding to grab her from the house and to have Tierra meet Shay.  The timing is poetic, as JUST when Sean is walking up to the house, Tierra is screaming that she can't control her eyebrows, her parents warned her that other women would try to "take her sparkle," and that men LOVE her and woman are jealous of her (also known as the internalized sexism anthem).  There's a whole lotta hand motioning, head wiggling, and tears going on. 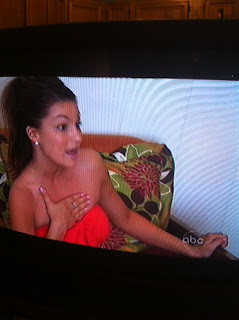 Sean walks into the aftermath and tells a tear-stained Tierra that she should simply go home, as this seems to be a toxic situation for her.  Tierra continues her tour of blaming other women, whining, "I hope they're happy" as she is driven away. GURL, SEAN DUMPED YOU--the other women didn't dump you.  Stop blaming everyone else in the world for YOUR LIFE.  (This is getting a lil Dr. Phil, huh?)

That night, the ladies arrive at the cocktail party with no idea what happened with Tierra. They learn that Sean sent her packing because of her drama and AshLee has a moment of anxiety about her (minimal) role in the fight that afternoon.  Thankfully, Sean knows that AshLee simply got caught in the crossfire of Tierra's mayhem but AshLee isn't the dramatic one.  Sean doesn't want to have a cocktail party, though; he's going straight to the rose ceremony.  (If I were on the show, I'd be like, "No cocktail party?  Umm... can somebody just hold my legs while I do this white wine stand REAL QUICK? I have a straw--I just need a lil boost! I aint going into a rose ceremony without a little buzz, mmmmK? BTW Chris Harrison, I'm a HUGE fan!")

How did the rose hand-out go down?
Lindsay already had one, then they went to...
Desiree
Catherine
AshLee