I watched 4 hours of The Bachelor over the course of 24 hours and I'm dumber for it.  But goodness gracious wasn't two straight nights of Bach antics kind of fun?

After their week in Montana that was rockier the Montana Rocky Mountains (thanks, Wikipedia, for informing me that the Rockies stretch through Montana and are more than just a sweet John Denver song and a bad professional baseball team), Sean and remaining 9 ladies head north to Canada.  In Canada they'll tackle more active, nature-based activities and as BFF Suzanne and I were discussing, WE GET IT, SEAN.  YOU LIKE NATURE AND BEING ACTIVE.

This episode will include two 1:1 dates and a group date, with roses "up for grabs" (oh Chris Harrison--your Bach jargon is precious) on all of the dates.   Catherine (cute, spunky girl who is half Asian, I'm guessing) scores the first 1:1 date and meets Sean in a frozen, snow battered tundra.  Sean drives up in a giant snow bus and picks her up, then they have fun playing tour guide and making corny announcements on the bus.  (You know who doesn't PLAY tour guide, but used to LIVE it? THIS GUY! Yes, I worked for 3 years as a tour guide on the Sex and the City bus tour in NYC.  If you've never done that tour, DO IT.  But I digress.)  Catherine and Sean attempt to play in the snow and drink cocoa, but the ice and slush WHIPPING them in the face looks pretty painful.  That night they meet back at the lodge and hop in a surrey with a fringe on top (where my Oklahoma! fans at!?!?!) and ride to an ice castle where they sit by a fire and sip cocktails.  The producers must have required each lady to share a personal story this week because somehow eeeerrrybody in the club gettin' emotional!  Literally EVERY gal trotted out a story of dead friends/dead acquaintances/abuse/emotional turmoil and the phrase "that's why I am the way I am" was used more than once.  Let us not forget that the producers of The Bach are truly the master of puppets, just like Metallica wrote and my high school beau Frank used to sing to me. (He'd sing "Selena! Selena!" during the "Master! Master!" part... swoon.)

The next day is a group date and the crew is Tierra, Sarah, AshLee, Selma, Lindsay, Daniella, and Lesley.  The ladies meet Sean at Lake Louise and they all canoe across, then learn that they'll be doing a Polar Bear Plunge.  To the uninitiated (or those who never attended summer camp), a Polar Bear Plunge is when you jump into a body of water in freezing temperatures.  You're required to fully immerse yourself (you MUST dunk) in order to really complete the challenge. The forced dunking part is why I would NEVER do such a Polar Bear Plunge (well, that and the fact that NO ONE is permitted to see my pasty skin in a bikini in the winter).  As many of you know, I haven't dunked my head underwater in a DECADE, thank you very much.  Blonde highlights are an expensive habit and I'll keep my sweet weave above water from here on out.  But enough about me.

Medics are on hand to supervise the Polar Bear Plunge and Selma immediately opts out, saying that her people are from the desert and don't do well with cold.  I give Selma props for saying no and not wavering.  SHE knows how to preserve a good blow-out!  The rest of the gals strip down to bikinis and put on Uggs and robes.  They assemble by the edge of the water and hop in, with Tierra as the last one in, I noted.  The dip is super quick and everyone gets right back out and puts back on their boots and robes, plus many blankets and hats.  Everyone except Tierra!  She's the ONLY girl who wore a sequined bikini and she's the only girl who couldn't seem to get her clothes back on right away.  THUS the reason she's freezing.  The sweet, Canadian medics on hand use their medical knowledge to try and help her friggin' COVER UP, but she's just flailing about and shaking.  They wrap her in metallic blankets plus regular blankets and carry her to a car, then put her in a hotel room where she is hooked to an oxygen tank and her mascara is ALL over her face. Has Tammy Faye Baker just been dunked underwater or is Tierra the newest member of KISS? 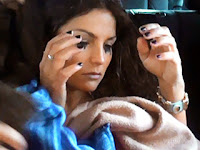 The whole thing was ridiculous and bizarre.  Out of the 6 women who jumped into that cold water, Tierra probably has the most insulation on her (no offense, just truth--she works it!), she was in the water for probably less time than anyone else (how quickly can Sarah get out of that water with 1 arm? Seriously), and yet she's the ONLY one with "hypothermia"? As the late, great Nell Carer used to say... 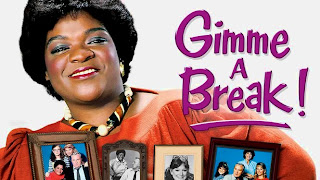 The girls are growing tired of Tierra's antics and sweet AshLee pinpoints it saying, "Tierra's like the boy who cried wolf."  TRUTH!  In this season of The Bachelor there have been a handful of girl fights and TWO medic calls and the common denominator of all those incidents? The watered down Jacqueline Onassis herself, TIERRA.

That night at the afterparty, Sarah shows Sean sweet family photos from her childhood, Tierra shows up late and walks like she has lost the use of her feet thanks to Canadian cold weather, and Lesley (blonde Arkansan) ultimately scores rose.  Sorry your plan didn't work, Tierrible.

But the night isn't over yet.  All the ladies go back to their rooms and Sean interrupts them, saying that he needs to talk to Sarah.  He has a private talk with her and explains that he is letting her go and he doesn't want to put her through 2 days of waiting.  A classy move on his part, but Sarah's tears straight-up made me cry. I KNOW!  Sarah handled the rejection beautifully, holding it together until she was alone, but her comments really resonated with me.  In her ride away, Sarah said that it's always the same and that she's tired of being told forever how GREAT she is and what she deserves, and that's when I lost it.  Sarah, I feel you girl.  Completely.  If I had a dime for every time I have been disappointed by a guy and found myself on the subway home, listening to a heartbreaking country song and thinking, "WTF? I'm nice... I have personality... I have good hair," I'd be a millionaire.  And of course friends are like, "You're great! You deserve a great guy," and I know, but where is he? (I realize that I just quoted one of Charlotte's lines from Sex & the City verbatim.)  Did this just get a little too real, sweet readers?  I'll get back to snark in the next paragraph, but for now: Sarah is a super jazzy gal and I know we were all sad to see her go.  And I hate myself for saying this, but you ARE rad, Sarah, and you do deserve all the happiness and love in the world.

OK, back to smack-talking and snark.

The final 1:1 date is Desiree (Poor Man's Katie Holmes).  Sean and Desiree rappel down a mountain then have drinks inside a teepee that's decorated with dream catchers (somewhere my college Native American Religious Traditions Professor is asking his wolf spirit guide for advice on how to deal with the white man and his love of Native American symbols).  Desiree trots out her "that's why I am the way I am" story and shares with Sean that she grew up poor and lived in a tent occasionally.  Then Desiree fulfills the producer's dreams and makes a parallel between growing up in a tent and now kissing in a teepee.

Finally, it's cocktail party time and the ladies are dolled up to face rejection.  During the cocktail party, Selma awkwardly kisses Sean (practice makes perfect and I doubt Selma has had much), AshLee puts on a blindfold and Sean carries her around (more of that whole "being emotionally vulnerable" thing), and Tierra stews while wearing an odd, animal skin loop scarf.

Catherine, Lesley, and Desiree already have roses, so they are safe.  Who else scored a flower?

-Lindsay (her "big reveal" is that she sleeps naked. She's so deep!)
-AshLee (I adore her and want her to know that it's nor her fault, Good Will Hunting-style)
-Tierra (how does it feel to be LAST now, gurl?)

So now we're down to 6 ladies and everybody is heading south to St. Croix.  You better know that Tierra's packing her sequined bikini and a suitcase full of drama!
Posted by Selena Coppock at 11:02 AM