I have been derelict in my duty to report to you the goings-on of Bach Sean and his remaining trio of bikini-ready brunette beauties (pour some out for the blonde gals we have lost this season, wouldja?).  My apologies.  I got back from LA on Monday night (after a DOOZY of a flight involving tons of screaming/crying children and a lot of VERY smelly people) then I had shows every night this week.  Mama needs to tell her jokes, kiddos!  But when she does, she can't Bach recap so quick.  Deal with it!

So we're down to 3: Lindsay (wedding dress 24 year old), Catherine (26 year old who likes to tell America facts about her father's crippling depression), and my favorite gal AshLee (32 year old gorgeous Texan with awesome hair who can do no wrong and deserves more happiness than anyone else in the world). Oh, and errrrybody's in Thailand.  (I wonder if they actually drink delicious Thai Iced Tea in Thailand, or if it's like Long Island Iced Tea where... well... no, I'd bet that Long Island residents get rowdy with their LITs, so please ignore this parenthetical aside.  Back to Bach talk!)

Lindsay gets the first 1:1 date and she's in a cute, flowy skirt and white tank top--looking good, despite the heat & humidity!  Lindsay and Sean ride in a little cart powered by a low budget moped and arrive at an outdoor bazaar.  On the way, Lindsay said that she'll eat anything except bugs.  Well guess what's on the menu, Wedding Dress Boozehound Lindsay? BUGS! WHY oh WHY do they keep pushing these girls to go outside their comfort zones!?  I'll stay right here inside my comfort zone where there's a Dunkin' Donuts on every corner and my colorist is always available, thank you very much!  Because she's eager to please Sean and avoid a fight on national TV, Lindsay puts back grubs and grasshoppers and I am absolutely horrified.  Then they don swimsuits and go to a beach where they feed monkeys. MONKEYS! Oh my goodness is there anything cuter than a monkey? NO! Look at this little amigo who expression seems to say, "Sean, was it really necessary to make your would-be bride eat bugs?" 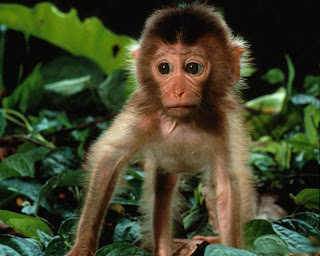 That night, the couple gets dressed up for dinner and Lindsay must have stolen dresses off the set of "Don't Tell Mom the Babysitter's Dead" because her white get-up just screams 1991.  They talk and watch Thai dancers, then head back to the Fantasy Suite where Lindsay tells Sean that she loves him and Sean responds, "thanks."

Up next is AshLee's 1:1 date and yes, there are more personal challenges and forced pushes out of comfort zones--blech.  AshLee admits that she's "not sure where Sean's head is at" and she's also not sure how to avoid dangling prepositions.  Oh gurl, I love ya though.  Sean and AshLee ride on a boat, then swim through a dark cave and that 5 minutes spent Doggy Paddling is a metaphor for how AshLee needs to work through her issues with abandonment blah blah blah.  That night they eat a candle lit dinner in a pagoda on the beach (very cute) and have a great conversation about how they're both still single at 32 and their family/friends think that they are like aliens because of that fact.  I feel ya, Sean and Ash! (Can I call you Ash?)  They go back to the Fantasy Suite JUST TO TALK where AshLee says that she likes cushion cut diamonds or something (I don't know diamond jargon) and her ring size is 6.5.  Now that's chutzpah.

The final 1:1 date is Catherine and Sean and they do some boat riding, too.  Catherine makes a Titanic joke (why do people insist on making jokes about the WORST boating accident in history EVERY time they are on boats?) and keeps saying that she's weird and super nerdy.  They strip down to swimsuits (and Catherine is rocking a 2 color bikini, which I adore), then back flip into the water.  They swim to shallow water and it starts raining, then they kiss in the rain (what is this, a hit single from fall of 1997 that I was obsessed with in high school?).  That night they have dinner and talk about where they see themselves in 5 years (like you do on an early date/job interview) and Catherine says no dice on the Fantasy Suit because she wants to be seen as "a lady."  I'll admit that AshLee and Catherine's discomfort with the implication of the Fantasy Suite (HUMP DOWN!) is actually really refreshing.  Go girls!  Catherine and Sean go back to the suite to talk and she refers to Sean as "such a hunk"which is corny but endearing.

The next shot is Chris Harrison back at the Bachelor mansion introducing an SHAMELESS promotion for some Wizard of Oz thing that ABC is broadcasting.  I fast forwarded so I have no idea what that was about.  If it's not the original or The Wiz, I'm not interested.

Finally it's rejection/love time and it's drizzling out, so I fear for the ladies hair. The girls arrive with cute Thai parasols to protect their domes though, thank God.  Lindsay is in a cute blue dress with a mullet style bottom (shorter in front, longer in back).  Catherine is in a salmon sundress and says that Sean "gives her the wiggles" when she thinks about him (she crossed a line of corniness now--it's just too much).  AshLee is wearing a gorgeous, statement necklace and a SKIMPY dress that looks more like nipple covers and pants.  Yowza.

Sean says that this week is especially hard for him because this final 3 week was when Emily negged him back in that season (he used different phrasing, but you know what I mean).  Let's get to the good stuff.  The roses are handed out to...

Lindsay (you seriously think you could marry a 24 year old, Sean?)
Catherine (Titanic jokes don't sink Sean's heart... or something)

So sweet AshLee is going home.  She handles the rejection with aplomb, though, simply walking out of the rose ceremony and getting in the car.  Sean tries to follow her out and she asks him to simply stay there, but he insists.  As he tries to explain himself by the car, AshLee just stares at him and says nothing, then gets in the car.  GOOD GIRL!  Now THAT is how you get dropped on national TV and not come off looking like a complete loser.  Just keep it together and WALK AWAY.

In the car, AshLee mostly holds it together and doesn't say much. She did say one very telling thing, though: that this was never a game to her, that it wasn't all about laughter and having fun.  Oh AshLee, I think that was your problem.  It's such a hard dance in Bach land--to try and just let things unfold without overthinking it, but also be somewhat smart about the whole thing. It's not easy.

On Monday 3/4 is the infamous "Women Tell All" episode and I can't wait!  If Bach tradition holds, all of the rejected ladies will be coming back looking FIERCE and at least one gal will have changed her hair color.  I can't wait!
Posted by Selena Coppock at 12:13 PM