The summer is almost here and you know what that means: It's time for a fresh season of The Bachelorette!  Actually, summertime isn't "the season" as far as Bachelorette, since ABC slots this romance trainwreck of a show into any 6-8 week slot that they can, but hey, whatever, it's Bachelorette time!

This season's Bachelorette is Desiree from last season.  What do we know about "Des"?

She's the brown haired girl with small teeth (I'm just reporting the facts, people) who came in 4th place (if you can "place" in a show about finding love) during Sean's season of The Bachelor.  As I said during that season, Desiree is a poor man's Katie Holmes whose parents are sweet, but whose brother is a tattooed vagrant psychopath.  Here's hoping the brother shows up and grills the suitors!  Here's the promotional photo of Des and her boys.  That schmoe wearing a light blue jacket in the front row is a GEM, I'm sure. 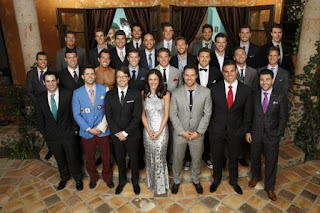 This season kicks off on Monday and you KNOW I'll be watching!  Get your recaps and smack talk right here at this 'old blog.
Posted by Selena Coppock at 8:02 AM